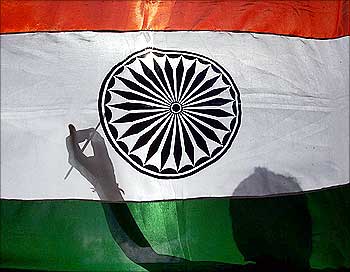 India achieved the distinction of being the second fastest growing economy amid the global recession in 2009, but the joy was marred by the decade's sharpest rise in food prices to the chagrin of common man.

For a country that continued to lose on its exports throughout the year that has gone by, economy achieved a remarkable growth of about seven per cent (during April-September 2009) on the back of focused government stimulus in tandem with well articulated interest rate-cum-monetary policy of the Reserve Bank of India.

But it is a paradox of sorts that price line that dipped from a 13-year high into negative zone at one point during the year climbed sharply again, with food inflation touching more than a decade's high of 20 per cent.

From the growth focus, the government had to concentrate on fighting the natural disaster ranging from drought to floods in different parts of the country that led to shortages of foodgrains and fruit and vegetable and the resultant spurt in their prices caused a political storm.

To add to this rollercoaster, developments in the economy, including in the share market, the general elections in May that helped the Congress-led United Progressive Alliance to retain power, lent further colour.

In the New Year, fear of rising inflation will continue to influence the economic policies, whether it is monetary review to be announced by the RBI on January 29 or the Budget to be unveiled by Finance Minister Pranab Mukherjee towards the end of February.

Powered by strong doses of three stimulus packages, the Indian economy did well, only next to China in terms of growth. Despite widespread drought and devastating floods in parts of the country, the economy during 2009-10 is estimated to expand by 8 per cent, up from 6.7 per cent in the previous fiscal.

India's growth during 2008-09 dipped from 9 per cent on account of the impact of the global financial crisis.

Stimulus, green shoots and exit policy will continue to remain the buzzwords as the government in the coming year will move forward to withdraw the extraordinary steps it took to fight the impact of global meltdown, domestic drought and spiraling food prices.

The focus of economic planners during the initial months of 2009 was to continue the stimulus to tide over the impact of financial crisis triggered by collapse of America's iconic banker Lehman Brothers in September 2008.

Not waiting for the election results, Mukherjee, while presenting an interim budget in February 2009 provided the third stimulus package to the industry to by announcing tax cuts and raising public expenditure.

These stimulus packages, backed by easing of monetary policy by the Reserve Bank, yielded some results which economists described as 'green shoots'.

As the green shoots appeared, the economy started looking up and in the second quarter (July-September 2009-10) recorded a high growth rate of 7.9 per cent, much more than anticipated by any analyst or think tank.

The impact, however, was not so visible on the external front as exports continued to remain in the negative zone for most part of the year. This has been on account of slow recovery in the external market.

Now with the US economy during the quarter (July-September) recording a growth of 2.2 per cent, though less that the initial estimate of 3.5 per cent, Indian exports too may look up in future.

After a gap of 13 months, exports in November registered a growth of 18 per cent and rise might continue with the global economy gradually shedding the recession, described as worst since the Second World War.

Buoyed by the performance in the second quarter, the Planning Commission and the Prime Minister's Economic Advisory Committee (PMEAC) have talked about revising their growth projections once the data for the second quarter was made public. Both these organisations had projected 6.5 per cent growth rate for the current fiscal.

The green shoots, which are apparently taking firm roots, were initially threatened by the widespread drought quickly followed by devastating floods. The twin impact of drought and floods badly impacted the farm sector and output of agriculture and allied sector growth rate slipped to below 1 per cent during July-September 2009.

Shortage, more importantly the likely shortage of essential food items, adversely hit inflation. The rate of inflation, measured by movement of wholesale prices, sprang up from the sub-zero level to cross 4 per cent mark and continue the northward march in the coming year.

More significantly, the food inflation soared to decade's high of around 20 per cent, driven mainly by the rising prices of pulses, potato and other vegetables.

Spiraling prices prompted the government to take host of fiscal and administrative measures to check inflation. On the fiscal these include cut in duty and removal of import restrictions on various essential items including pulses and edible oil.

As regard the administrative initiatives, the Centre persistently goaded the state governments to initiate action against hoarding.

These short-term measures may provide temporary respite, but in the long term, as suggested by recent the Mid-Year Review of the economy, the government will have to encourage food production to raise farm output.

Besides managing inflation, the real dilemma before the government is to time the exit leading to withdrawal of the stimulus, responsible for green shoots on the positive side and unsustainable fiscal deficit on the negative.

Fiscal deficit is expected to soar to 6.8 per cent of the GDP during 2009-10, from 6.2 per cent in the previous fiscal, on account of the twin impact of tax cut and high public expenditure.

RBI, in a small way, launched the first phase of exit in October by withdrawing some of the liquidity injection measures. These half-hearted measures are likely to continue in the final review of the monetary policy to be announced in January.

The task, however, will be more difficult for Mukherjee who will have to take a call on raising taxes in the upcoming Budget in February. As February 28, the usual day for presentation of the General Budget in the Lok Sabha, is Sunday, the bad news may come early, most likely on February 26, 2010.