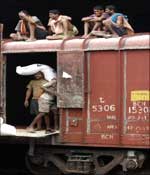 Thank God there's Rabindranath Tagore, so Mamata Banerjee could quote him to spice up her 2009-10 railway budget speech. And thank God there's China, so we can compare notes and check out how good her fare really is. And what we find is that it is old fast-food cooked anew, instantly palatable but a potential killer.

In a growing economy, can we afford to ride a snail? We need a railway system that's fast, dynamic, and expanding. We don't have one and won't have it till the time non-stop trains continue to be the best we can think of. Will they run fast? Faster than India's current fastest, the Rajdhani and the Shatabdi expresses, whose average speed is no more than 80 km per hour? If they don't run fast, they won't make much of a difference. In a country where any train that runs at 55 km per hour or more is called super-fast, we'll only have a few more. In plainer language, only a few more gimmicks.

How fast are our goods trains? No more than 19 km to 30 km per hour in different part of the country. In eight years from now, when some 3,000 km of dedicated freight corridors ( forming only a tiny segment of our total network) are expected to be in service, a few of them could - just could - be running at 100 km an hour. Some benchmark indeed for 2020 India!

Look at China. After six reviews and continuous upgrading, the average speed on the Chinese railways has shot up to 200 km per hour from 55 km per hour in 1997. There will be 35 high-speed routes by 2012, with trains running at between 200 km and 350 km per hour.

At least 50,000 km of dedicated high-speed passenger railways will be on the ground by 2020. Thus, existing tracks will be freed up for cargo trains, whose average speed is already 120 km per hour.

The difference between the two countries is even more glaring when it comes to new construction. Mamata Banerjee's budget provides for only 250 km of new lines in the current fiscal year. The provisions for the previous two years were for 350 km and 155 km of new lines, respectively.

Is that enough for a country whose economy is expected to grow by 8-9 per cent a year and which wants a fair geographical distribution of growth? We've gone through almost two decades of economic reforms, but our route length has grown from 62,367 km in 1990 to only about 63,350 km now. Do you call that progress? Can we go on flogging a limited network without sacrificing speed and efficiency and adding to congestion?

More than 75 per cent of India's railway goods-traffic moves on about 20,000 km of fully saturated, over-utilised, and low-capacity lines. One day, it will simply choke.

Network expansion has naturally meant more business for the Chinese railways. They have three times the number of wagons India has - 600,000 against 200,000 - and moved 3.3 billion tonnes of cargo last year, against India's 833 million tonnes. What is India's target for 2009-10? No more than 882 million tonnes. For a vast and growing economy like India's, it's nothing but a joke.

The other difference is that the Chinese know the value of time. We don't. Beijing's 126-acre West station, commissioned in 1996 and said to be the largest in Asia, was built in three years.

Work on the 1,318-km. Beijing-to-Shanghai high-speed railway, a brand new line meant to cut travel time between the two cities from 14 hours to five - mark that - began in April 2008 and is to be completed by 2013. What's our schedule, say, for making 50 of our stations 'world class'? We don't know. The budget doesn't say anything on that. The budget debate has revealed that many past promises have remained unfulfilled so far.

So, you may draw your own conclusions. Mamata says it's a continuous process, whatever that means. And, as the previous railway minister, Lalu Prasad, admits, not all promises are meant to be implemented.

Thus, while China goes on to cover the entire country with high-speed trains to bolster its economic growth, we are happy to tinker with whatever we have, much like a child playing with his toy-train set, adjusting it here and there and deriving pleasure from it. It's a game we play, rolling out new promises to hide old failures, with no sync with the real economy.