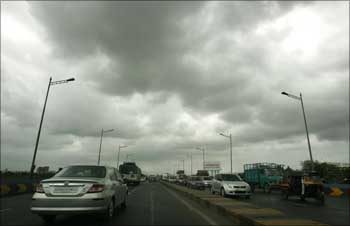 The monsoon is the true finance minister of this country. So, the economic present is not about disinvestment -- to do or not to do -- but about water and livelihood security. The indications are grim.

The monsoon is more variable this year than before. Even if it pours in the next few months, and the weatherman's calculator shows normal or near-normal rainfall, it wouldn't mean there was rain when and where it was needed.

This is not rocket science, farmers will say. For them, what matters matter are the time and distribution of rainfall.

The variability in our rainfall is leading to a bizarre situation today: Mumbai, for instance, is drowning in floods and yet gasping for water because its reservoirs - located some distance away - have not got any rains. The city will need to ration out its water if the situation does not get better, fast. At the same time, increased incidence of extreme rain events can be seen - it only pours,  leading to floods and devastation. Not good. Not good at all.

Is this variation in our monsoon caused by climate change? Nobody has a specific answer to that. But weather scientists agree something is definitely afoot. The monsoons in India have always been unpredictable and variable. And yet, after years of study and investment in improving our science and instruments of prediction, the variability is growing, and predictions are becoming nearly impossible. Let's now join the dots.

Models predict that the impact of climate change will be seen in terms of increased sub-regional variations in rainfall and more extreme rain events. This is exactly what we are beginning to see: More rains, in lesser rainy days. In a country which already gets rain for less than 100 hours in a year of 8,760 hours, this is disastrous.

It is this change in our monsoon that must be simulated, for the future. Our need and thirst for water are growing exponentially. We keep forgetting that we cannot develop our economy without enough water.

Just consider: In the western rich world, the bulk of water - roughly 80 per cent - is consumed in cities and industries. But it works for them: The same proportion of people live in cities. Water has moved with the people and the economy.

Now consider where we are: The bulk of India lives in villages, where water drives agriculture and local economies. But cities and industries are growing and need more water.

Yet, since the number of people hasn't moved in the same proportion, the water usage has to be shared - between old users and emerging ones. It is no surprise that cities, with their powerful constituencies, are pulling water away from what remains a diffused constituency in rural areas.

Today, most cities get their water from dams, lakes and groundwater aquifers located further and further away. This 'appropriation' is leading to tension, indeed war, in many cases. These skirmishes will grow as the stress heightens.

So there are two distinct features to our present water situation. One, variability in rainfall has increased, making it difficult to predict or plan for. Two, our water need (and greed) has increased.

In such a situation, we are literally on the edge of water-stress. Today, most parts of the country, particularly big cities, have no capacity to withstand a delay in the monsoons of even a few weeks, let alone even one year of near-drought. We cannot cope with the change that is afoot. Unless we do things differently.

Are we getting the future right? Let's take Budget 2009 speech. The finance minister has substantially increased allocation for the irrigation sector, for water and sewage provisioning in cities (through the urban mission) and for rural areas (through hugely-hiked funds for the employment guarantee programme).

But this is a zero-sum game. Take spending on irrigation systems, where capacity already created is lying waste because canals or other systems are hardly maintained. In fact, even as government after government has spent money in building large water-irrigation systems, people have moved away to use the resource they can depend upon -groundwater.

Today, not only does the bulk of Indian agriculture remain rain-fed - now, on increasingly variable rainfall - it also depends on groundwater, and not surface water. This is where the budget stings: While allocation for surface irrigation has gone up, groundwater remains 'minor irrigation' and has got less money. There are over 19 million groundwater wells and tubewells in the country. This resource, over-used and over-extracted, provides a distributed water system in the country. The question is if rain is distributed, why can't recharge be distributed as well?

Let us be clear: We are facing a water emergency. Much more needs to be done to secure our water for the future.