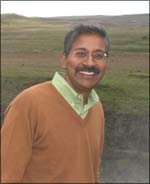 India has a good ecosystem, comparable to that of Boston, which is conducive to entrepreneurship. The country could, however, provide a much better environment if government policy laid equal stress on growing Internet penetration, said K Ram Shriram of Sherpalo, a global angel venture investment company.

Shriram should know: He's one of the founding investors of the over $22-billion Internet search giant, Google, and also on its board of directors. He left India 37 years ago but visits the country every six months or so, and has invested in nearly 10 Indian firms. He's on the advisory board of Naukri, has invested in Cleartrip, as also mkhoj and Paymate.

"It's the last-mile connectivity that's a major issue. Slow speeds hurt users and hamper growth. Internet should be just another utility like electricity. Why can't India have Internet numbers that are comparable to China?" asks Shriram, adding: "Spectrum is a renewable natural resource. I'm hopeful that with the 3G auctions, India will be able to move ahead quickly."

Shiram, who holds a Bachelor of Science degree from the University of Madras, invests primarily in two broad areas. The first revolves around consumer-facing Internet companies and, over the last two years, in companies that dabble in clean energy solutions and products.

His investment decisions are based on the quality of teams, the choice of technology and the business model. "I tend to be stubborn about big ideas, but am not rigid when it comes to the nitty-gritty. We are very hands-on, but that does not mean that we interfere in the business. Rather, we guide entrepreneurs," he insists.

He insists, however, that he "prefers to see some validation". That is why Shriram prefers not to use the term "angel" investor, preferring the word "Sherpa" (guide) instead, which also explains his company's name.

His earlier investments appear to have paid. "Four of these 10 companies are cash- positive and some like Cleartrip have achieved significant scale," he says, adding: "While the rate of new company formation is slowing globally, it's growing in India."

Shriram, however, prefers to work with entrepreneurs "who have a technical background". He believes it's easier for such people to pick up other skills rather than do it the other way round.

He adds that he's "not the typical angel investor". Rather, he knows how to build a business. In fact, he served as vice-president of business development at Internet retailer Amazon.

Before that, Shriram served as president at Junglee Corporation, a provider of database technology, acquired by Amazon in 1998. Ram was also an early member of the executive team at Netscape (which was later overshadowed by Microsoft's Internet Explorer).

And that battle does not appear to be over. Shriram still holds over 1 million shares of Google (each currently priced at over $440).

"At Google, the focus is on customers and users and not on our competitors (obvious reference to Microsoft)," he asserts. The Internet search giant's current focus, he notes, is on cloud computing (a metaphor for the Internet) "which is changing the paradigm of computing". Now we can have low-cost netbooks (below Rs 10,000) with applications that users can afford, he explains.

But does he see a Google coming out from India soon? "It's asking a lot in the current situation. Such companies spring up once in a decade," he says. But he hopes, given a proper ecosystem, that day may not be very far.