Going by available indications from North Block, Mr Mukherjee may like to do a Chidambaram when he presents the Revised Estimates on February 27, 2010, A K Bhattacharya.

An economist friend of the current prime minister once lamented that he had lost respect for Budget numbers because the Budget Estimates went through several revisions and became quite different from the Actuals that were put out a year or two later. Over the years, this has become the standard criticism of all the numbers that finance ministers trot out in their Budget speeches every year. 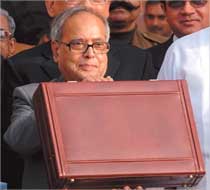 Yet, economists and analysts can hardly do without these Budget Estimates. Nor can the government substitute the current system of putting out the Budget Estimates at the time of presenting the Budget, updating the same numbers with necessary changes as Revised Estimates a year later and then making a further revision to present them as Actuals another year or 18 months later.

The reality is that everybody eagerly waits for the numbers in the Budget Estimates to get an indication of how the finance minister plans to spend the government's money, how he raises the resources and how he wants to improve the government's fiscal health. Budget Estimates are almost like the "guidance" provided by companies at the time of announcing their quarterly results on how they hope to do in the coming quarters.

You may quarrel with the methods used, but the guidance certainly helps investors tracking the performance of those companies. There are companies famous for their conservative estimates of future earnings, simply because such guidance helps them manage the stock market's expectations.

If the actual result is better than the guidance, the market sentiment suddenly gets better, just as the market punishes the stock of the company, whose result guidance is unreasonably optimistic.

His final figures on fiscal deficit were better than what he had projected in Budget Estimates in five out of the seven Budgets he had presented - two under the United Front government and five under Manmohan Singh as prime minister.

The exception, to prove the rule, in Mr Chidamaram's case was his Budget in 1997-98, where he had projected a fiscal deficit of 4.5 per cent of gross domestic product (GDP), but ended with a marginally higher figure of 4.7 per cent. His last Budget for 2008-09 showed 2.5 per cent as the fiscal deficit in the Budget Estimates and when the Revised Estimates came out, the deficit figure had ballooned to 6 per cent. However, that was an aberration, largely because of the extraordinary circumstances requiring liberal doses of fiscal stimulus measures in the wake of the global financial downturn that year.

The question on what the Revised Estimates of fiscal deficit for 2009-10 should be must have already begun bothering Finance Minister Pranab Mukherjee as he prepares to present his second Budget next February. His Interim Budget for the current year had projected a fiscal deficit of 5.5 per cent of GDP. His full Budget presented five months later in July put the Budget Estimates for fiscal deficit at 5.8 per cent.

Going by available indications from North Block, Mr Mukherjee may like to do a Chidambaram when he presents the Revised Estimates on February 27, 2010. Even otherwise, Mr Mukherjee will like to bring down the fiscal deficit from 5.8 per cent so that the task of meeting his own fiscal deficit target of 5.5 per cent for 2010-11 becomes relatively easy.

In other words, the fiscal deficit for 2009-10 may be a little less than 4.8 per cent, instead of the 5.8 per cent shown in the Budget Estimates.

That will indeed be a pleasant surprise. What's more, this would pave the way for a gradual exit from the fiscal stimulus measures that the finance minister may have already planned for the next financial year.