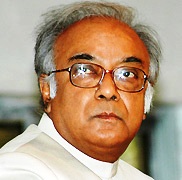 There are two sides to Asim Dasgupta: as the chairman of the empowered committee of state finance ministers, he is a success story. As the finance minister of West Bengal for more than two decades, he is anything but that.

First, steering the value added tax and now the goods and services tax, he will certainly go down in the books of India's fiscal history.

Though the GST is still far from being implemented and may have deviated from the ideal objective of having a single GST, but Dasgupta has managed to bring about a consensus among 35 states and set out a roadmap. That's no mean achievement, even his worst critics will admit.

Industrialists always have a bagful of complaints against him. Likewise felt bureaucrats. Files are stacked in his office, they never move.

An industrialist said his file was buried in Dasgupta's office during Jyoti Basu's regime. At Basu's behest, the industrialist's proposal was incorporated in the finance minister's speech. But the two lines in the budget speech were all he got, the proposal was never implemented.

Another nagging problem: Dasgupta does not have time for industry. Not even industry associations. "We have been trying to get an appointment for the past one year, but he is yet to make time for us," said an industry body representative.

But in the Left Front government, Dasgupta's image is different among the political leaders. He is the erudite, Massachusetts Institute of Technology-trained communist leader brought in after Ashok Mitra.

Surprisingly, a Left Front leader, who was never happy with the policies of the Buddhadeb Bhattacharjee government that have now gone wrong came to his defence.

"Industrialists will never like him. They are allergic to communists and Asim is a true-to-the-spirit communist. He will never go against his ideology," said the leader.

The industrialists may find him unapproachable, but for his students at the economics department of the Calcutta University, he was always a phone call away. A student recalled, "He would write his number on the blackboard and say, call me if you need to understand anything."

Relegated to the background in West Bengal's industrialisation drive, Dasgupta has made a comeback in the government's more trying times. He is now the face of the government, making important announcements.

But Dasgupta is not known for his political acumen, at least that's what his colleagues say. "He knows his limitations and refrains from making political statements," said a Cabinet colleague.

But once in a while he does throw in a gimmick or two. In the middle of the year, when potato prices were hovering around Rs 19 a kg, Dasgupta announced that this staple vegetable would be made available to ration card holders at Rs 13 a kg in select city markets, to be expanded to districts later.

Immediately, hundreds of officials and staffers of the co-operation department and Essential Commodities Supply Corporation were sent packing to the markets to sell potatoes, only to add to the confusion. People soon found that they would have to spend more money travelling to the 'select' markets than paying the extra bucks.

"If you don't know Asim Dasgupta, then you don't know the West Bengal government," said the Left Front leader. Industrialists differ. 'Complete antithesis,' they say. Or, that's what they hope for.