Merc takes on the Audi. Who wins? 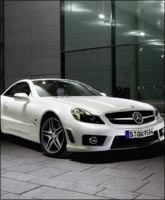 Every time the big three in the luxury car space bring out a new car, it is immediately subject to incremental improvements. For Mercedes-Benz, these increments were becoming a problem.

Over the last decade, the W210 and W211 E-Class were incrementally better than their predecessors on paper. But reality seemed to deliver it a nasty blow. Electronic gremlins, reliability issues and what not were driving the three-pointed star into the red quicker than their association with Chrysler.

Build quality too was suffering and every time JD Power & Associates would release a report, the chief quality officer at Mercedes-Benz in Sindelfingen probably sent the document to his computer's Recycle Bin. Maybe, because he knew a secret that all of us weren't aware of - the W212 E-Class!

There are numbers attached to this one too. Overall rigidity is up by 30 per cent, aerodynamic efficiency is improved to 0.26 Cd, making it the most aerodynamic saloon on sale, fuel efficiency has improved by up to 23 per cent and the list goes on. But ask the true blue E-Class fanatic and he will tell you that this is Mercedes-Benz's way of saying, "We are back!"

Quality improvements have been made, reliability is on the up, the E-Class is better loaded and specced than its competition and a distraction called Chrysler has been offloaded.

It all sounds nice, except that Audi have been quietly chipping away at the heels of Merc all this while. And the A6 has been recently facelifted, while being offered with the gung-ho, 290 bhp 3.0-litre supercharged V6.

To counter it, Mercedes-Benz have called on the best V6 in their arsenal - the 268 bhp 3.5-litre V6 from the S350 to take on the might of Ingolstadt. It's time to roll up the cuffs!

For those familiar with the S-Class, this is the exact same engine block you will find on the larger sibling and is not the CGI, direct injection as one would have hoped it would be. Nevertheless, this is quite a jump from the erstwhile E280.

The longitudinally mounted engine, with its rear-wheel drive system, puts the car at a porky 1805 kg, up by 120 kg over the E280, but down by nearly 150 kg on the S-Class. So, how does that affect numbers?

In a rather big way, actually. The standing start to 60 kph is achieved in just 3.47 seconds, while the tonne is dismissed in 7.52 seconds. Now put that in perspective - it's 0.7 seconds and 1.2 seconds quicker than the E280, and the difference between the S-Class and this is also nearly the same.

Because the car sits lower and benefits from a very slippery shape, it cuts through the wind rather quickly. Even the 7G-tronic gearbox plays its role, as it doesn't linger into unnecessary revs, delivering power at the right rpm pretty much all the way through.

The E350 sounds very refined as it goes about its job of dismissing 200 kph, yet has a rorty exhaust note as the revs start to rise above 5000 rpm. A top speed of 233 kph was achieved rather easily, though it can go on to 240 kph on Indian fuel without breaking a sweat.

But it's the Audi that feels and is quicker. With a power and torque advantage, thanks to the supercharger, the A6 blitzes the E350 and leaves it firmly in its rear-view mirrors. Sixty kph comes up in just 3.02 seconds, while it is quicker to 100 kph by eight-tenths of a second.

The turbine-like whirr and immediacy from the car is so apparent that it bests the Merc even at passing speeds. Top speeds are pretty similar, yet it is the Audi that delivers the goods when given an empty stretch of road.

In the city, the E-Class turns the tables. Because its gearing is unruffled by the constant shifting of ratios, unlike the Audi's multitronic, it delivers its torque seamlessly. The Audi, on the other hand, feels jerky at low speeds and the constant kicking in of the supercharger catches the gearbox and the driver off guard.

The usual given has been that a Merc delivers a cossetting ride, a lightweight steering setup and has a very neutral handling balance that will never warm the insides of a driving enthusiast.

How the new E-Class changes that belief begs to be experienced. The new steering setup has dialled in more feel, yet is extremely well weighted and never feels heavy on your forearms.

At low-speeds, the feel isn't as good, but it's still the best here and progressively builds up to feel sporty, yet balanced. This has made a difference in the way the car handles perceptibly. When pushed hard, it develops lots of grip, but not enough to keep the gecko called an Audi in check.

Yet, the envelope allows you to enjoy yourself, even when the unobtrusive ESP kicks in. This has meant the use of 17-inch wheels and a marginal deterioration in ride quality and yet, it is leagues ahead of its competition. The fine balance between sporty handling and a cosseting ride now has a new benchmark.

The Audi's advantage lies in its quattro four-wheel drive system. Unlike the RWD unit of the Merc, you can dial more speed into the corner and exit at exactly the same speed, making slow-in, fast-out a thing of the past. This helps, especially when you are on not-so-well paved B-roads, lined with the odd road undulation or pothole.

It just ploughs through those sections with authority, but at no time do you actually get enough steering response. It is dead at low speeds and builds up to provide decent feel at higher speeds, and yet isn't something one would call brilliant. The 18-inch Bridgestones don't necessarily provide the best of grip, saved only by quattro, while delivering a slightly bumpy ride. The pre-facelifted car's setup felt best in this regard.

So, on paper, the E-Class is incrementally better. But in real life, it is revolutionary and a revelation! The sublime balance between ride and handling, a gem of an engine and great interiors make up for whatever quirks one might find with its overall design. What really surprised us is how much better it is than its predecessor, and it leaves its competition with lots to ponder about.

The A6, despite its fantastic engine and quattro setup, just doesn't win the day for Ingolstadt. Importantly, the car never leaves you with that "special" feeling, leaving you to appreciate its industrially perfect, yet numb interiors, bits of which can also be found on other cars from VAG.

When you are in the market for a car costing around half a crore of rupees, you want to feel pampered and appreciated, and the Audi just can't muster that. And it won't until 2011, when a new one finally comes through. Until then, or at least until later next year, when the new BMW 5 Series is expected, Mercedes-Benz have every reason to believe that they sell the best car in its class.

Check out the Audi RS6 Avant!