A common carrier policy, as in the petroleum sector, is worth looking at, writes Sunil Jain.

Going by the nature of the questions being asked to Attorney General GE Vahanvati in the government's appeal in the S Tel case in the Delhi high court, the government is in for a tough time. 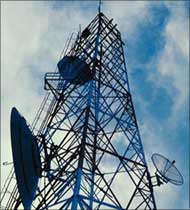 The S Tel judgment last July says telecom minister A Raja's September 25, 2007 cutoff date decision is illegal and that all the 46 firms that applied for licences have to be considered instead of just the nine Raja favoured.

Given the government doesn't have the spectrum to give the licences, there is an obvious urgency over the Telecom Regulatory Authority of India's consultation on the matter since, if Trai caps the number of telecom operators, the government can present the court with a fait accompli.

But Trai's consultation is important for other reasons as well. It has various calculations that show, even after the 3G auction takes place, we have a huge spectrum shortage - while we need around 582 MHz of spectrum for all telecom needs by 2014, Trai says only between 287 MHz and 453 MHz can be made available for commercial use, of this telcos have been given just 80 MHz!

There's no point just blaming Raja, there just isn't enough coordination between various ministries on this since the spectrum has to be vacated by defence, space and other sectors.

It may well be, as many argue, that Trai's consultation is a delay tactic aimed at allowing Raja to give more spectrum free to the telcos to whom he dished out bargain-basement price spectrum, the subject of the current CBI raids on his ministry.

While Raja has given out 4.4 MHz to each player and can dish out another 1.8 MHz, the Subodh Kumar report on spectrum recommended in May that all future spectrum, including this 1.8 MHz, be auctioned.

The scepticism about Trai's consultation is warranted since it basically seeks to once again do much the same exercise done by the Kumar committee. In any case, several of its questions - such as delinking of spectrum from licences, penalties for non-usage of spectrum, allowing of trading in spectrum - become redundant once the market price is paid for spectrum.

Why would, after all, a firm pay a king's ransom for scarce spectrum and then not use it? If a company has paid the market price for spectrum, why should it not be allowed to trade in it? The list goes on. But let's concentrate on the bigger issues.

Vodafone has done some further refinements and according to its calculations, if four operators are given the same amount of spectrum which is currently given to 10 operators, they will be able to deliver 10 times the capacity due to economies of scale.

Estimates given by different consultants will vary, but broadly speaking, this means with just the 80 MHz of awarded spectrum, telcos can service the voice needs of around 700-800 million subscribers!

And at an obviously lower price since once the operators have more spectrum, they will need to put up less base stations and the savings can be anywhere up to a fourth. So, bye bye falling margins!

If things unfold in the manner most expect, Trai will recommend telcos be allowed to merge without having to surrender spectrum - there will be consolidation and we may end up with five-six operators with 12-15 MHz of spectrum each. This will be a good thing, but what does it do for competition? Trai has traditionally argued there is enough competition with just four-five players - arguing on the technicalities is tedious but anyone who has seen the huge difference in tariffs and costs for SMSs/long distance calls/roaming etc, knows this is simply not true.

So, never mind what the Herfindahl-Hirschman Index tells Trai or various economists, it is critical that Trai keeps a strict vigil on costs and tariffs and, if need be, go back to tariff regulation.

Another option, suggested by fellow columnist Shyam Ponappa, worth looking at seriously is to allot spectrum to pure infrastructure players like a Nokia, a Google or an Ericsson. This can either be done with new spectrum or even by taking back spectrum from existing players - this can be done only if, as in NTP 1999, telcos see a benefit for themselves from being able to service a lot more subscribers as a result of the technical efficiencies from pooled spectrum (this is nothing but the "common carrier principle" adopted in oil/gas/electricity pipelines/networks).

The spectrum company can then allow a host of telcos to run their networks on its large spectrum band. Theoretically, the same thing can be achieved by allowing the Bhartis and Vodafones to consolidate, but this will probably shut out smaller players that, as we continue to see, have the potential to completely change tariff structures.