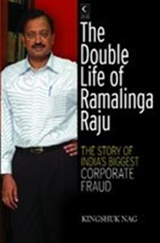 Kingshuk Nag, a Hyderabad-based journalist who covered the Satyam affair from day one, brings out Raju's split personality in great detail in the book -- The Double Life Of Ramalinga Raju.

On January 7, Ramalinga Raju confessed to his monumental fraud. He had, Raju said in a letter to the stock exchanges, cooked Satyam's books for seven long years - revenue, profit, bank balance et al. Raju was soon arrested and put in the Chanchalguda prison. The Union government swung into action. A board was appointed to manage the affairs of the company. In a matter of months, Satyam was sold to Tech Mahindra.

One question that continues to nag is why did Raju do it? In his confession, Raju said it was only for pretences. Satyam was smaller than what people thought. Without Raju's helping hand, it would have not been in the same league as TCS, Infosys and Wipro. His spin doctors say that Raju took the blame upon himself to save Satyam. Had the scam been discovered in the normal course of events, the company would have imploded.

Kingshuk Nag, a Hyderabad-based journalist who covered the Satyam affair from day one, argues that Raju did it for his love of real estate, and his two sons, Teja Raju and Rama Raju Jr. Raju's father was a landlord. Though he was a new economy icon, Raju could not stay away from the lust for land. He had floated no less than 327 companies to buy land.

The money for these purchases, says Nag, Raju arranged by selling his shares in Satyam. This is perhaps where the inflated numbers fit in. Shorn of the fanciful results, the Satyam stock price would have been smaller. The more the stock price, the higher Raju's wealth. When Satyam went for an initial public offer, Raju let his stake fall to 18.8 per cent. So, there was a limit to how much he could sell. Raju thus got Satyam to issue bonus shares to him frequently. As a result, he always had shares to sell or pawn.

Raju's friends say that for the last few years he did not sell a single share in the market. So, they argue, the stock market angle does not work. The accounts were inflated not to ramp up the share price but to keep the Satyam flag flying! But there is a serious flaw in this argument. Raju may not have sold shares but he did pledge his entire stake with creditors. Here, again, better-than-actual numbers helped him raise more money than he could have got otherwise.

This money, Nag says, went into real estate. The other side says Raju ploughed it back into the company to keep the show going. Days after his confession, his private firms wrote to Satyam to claim the money back. The money trail, admits Nag, is yet to be proven conclusively. But the body of evidence he has put together is impressive. The text throbs with the passion and energy of a news reporter.

When the scam first broke out, the line of investigation was indeed that good Satyam money had found its way into shady private real estate deals done by the Rajus. At least one bidder for the company was clearly in it for the real estate involved. This was the premise the Andhra Pradesh Crime Investigation Department built its case on. The matter was subsequently handed over to the Central Bureau of Investigation. In its first charge sheet, it has not talked of this nexus. But the final word is not yet out. The Serious Frauds Investigation Office and the Enforcement Directorate too are yet to give their final reports.

More than the motive, Nag has brought out Raju's split personality in great detail. For the public, he was nothing short of a visionary. He had put Hyderabad on the global information technology map. He had studied abroad, collaborated with the best minds in the business and hobnobbed with world leaders. At another level, he was insecure and even timid. At home, with his family, he could be imperious. He traded freely, says Nag, in shares held by his mother, brother and sister-in-law.

Raju had won several awards for good corporate governance. He was the ideal corporate citizen - the ambulance service his charity ran has actually done a lot of good work. But he was also the one who brought Satyam to the brink of disaster. In his business dealings too, everything was not above board. Businessmen who had sold him the idea of the Hyderabad Metro project were eased out once the deal was bagged by Maytas Infra.

Not to be missed in the book are the personal details of the Rajus. If Nag is to be believed, Raju's mother doesn't know that her two sons are cooling their heels in prison. Not for the Rajus the rigours of prison life. They have a cook at their beck and call. The authorities have put up a badminton court so that the Rajus can keep their torsos in good trim. Hardly the treatment one would expect perpetrators of the country's worst fraud to get.

Satyam gets refund notices from 37 firms