The man behind the Air India strike

The former Indian Airlines pilot won a good deal for colleagues protesting a pay cut; but others question whether the victory was good for the airline, Mihir Mishra.

No one in the National Aviation Company Ltd, which runs Air India, would have ever thought that a protest by executive pilots would bring the state-owned airline to a halt. In that sense, Captain V K Bhalla, the representative of the executive pilots who went on a five-day strike, can claim a victory. 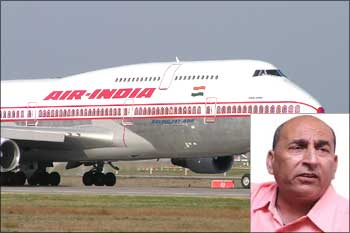 Fifty-year-old Bhalla is something of a controversial personality, even according to the colleagues whose cause he argued all week. For a start, his credentials to represent the protesting executive pilots, who account for about a quarter of the airline's 319 executive pilots, are unclear.

The executive pilots have no union - they are barred from forming one once they reach the managerial cadres - but Bhalla claims he was elected, a fact his colleagues confirm. All the same, he is not uniformly popular. Some senior colleagues suggest he is not a good pilot (a worrying thought since he is now an instructor) and others use the term "loud mouth" and "lacking vision" to describe him.

Asked about these descriptions, Bhalla, who did his initial flying training from Patiala and later went to France for Airbus training, said they could only have come from a rival faction. "If I am not a good pilot how could I reach this level?" he points out.

Bhalla, however, likes to project himself as a simple man. Even though his job requires him to deal with computers for hours on end, he declined to e-mail Business Standard a photograph of himself saying, "Main to gawar aadmi hu, mujhe Internet kaha aata hai."(I am a bumpkin man, I do not know Internet at all).

Whatever his skills as a pilot, it is Bhalla's experience as a successful negotiator against the management that convinced the protestors - mostly pilots of the erstwhile domestic carrier Indian Airlines that merged with flag carrier Air-India in 2006 under the Air India tag - to accept his leadership.

Bhalla's first stand-off with the management was in 1995, when he was president of Indian Commercial Pilots Association, which is the largest pilots' union in the current merged airline and was then the only pilots' union in Indian Airlines. (Bhalla remained the president for around a decade till the late nineties. He was later promoted to the executive cadre, which meant he could no longer be a union member.)

This prompted the management to form a committee under Vijay Kelkar, then petroleum secretary, to examine the issue. Since the pay rise did not coincide with any public sector-wide salary review, the solution was found in productivity-linked incentives (PLI) to bridge the gap with the private sector airlines.

Although this system appeased the pilots at the time, it skewed salary structures in the sense that PLI came to represent almost five times a pilot's base salary and most of it was not linked to productivity benchmarks.

This is what has caused the problem when it came to cost cuts for the pilots who were now part of the merged airline. The downturn in the airline business globally has forced Air India's management to cut salaries and, as with any organisation, it's the variable pay that usually faces the axe first. Only, for the Air India pilots, the variable pay forms a significant portion of their salaries.

The management justified the cutbacks on grounds that the airline had made losses of Rs 7,200 crore (Rs 72 billion) and, in any case, the move was temporary.

But pilots alleged that the airline management was focusing on staff costs to the exclusion of other areas of expenditure - such as fuel, overseas offices and so on - a contention the management contests.

Frantic efforts on Saturday night to allay the pilots' fears by offering to set up a committee to re-examine the issue (a standard public sector panacea) proved unsuccessful. Bhalla argued that the basic premise of a PLI cut was faulty, plus the committee lacked representation from the pilots.

His leadership was tested and proved when the Mumbai-based pilots of the erstwhile Air-India, who had agreed to rejoin duty last Sunday, backed down on Monday evening after Bhalla refused to relent and the talks between him and Air India chairman and managing director Arvind Jhadav failed.

Whatever the allegations and justifications, the four-day protest cost the airline Rs 80 crore in revenues at the height of the festive season. From carrying 33,000 passengers a day just before the strike hit, the airline only managed to ferry 10,000 a day, thanks to widespread flight cancellations.

Finally, the agitation was called off on Wednesday morning after the management, under government pressure, agreed to keep the cuts in abeyance pending examination by a committee that would now have a pilots' representative on board.

The past week has certainly ended in a victory for the pilots, but Bhalla's detractors - and this includes other pilots - think the protest proved his lack of strategic vision. Pay cuts, they argue, were inevitable given the global downturn in the aviation business.

Bhalla, however, says that he is satisfied with the outcome. So now, it's probably a case of who's the bigger loser.