Is the Indian market overvalued?

Look at the price-earnings ratio, and not just the Sensex, writes Shobhana Subramanian.

A look at the Sensex value doesn't give you the correct picture since what matters is the earnings outlook for companies. It would be incorrect to assume that the markets are cheaper when the Sensex is at 15,000 or that they are more expensive when it is at 20,000. 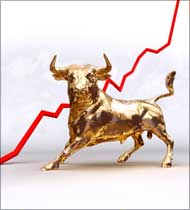 That's because a market is valued according to the estimated future growth in profits of companies. The growth outlook for companies can be brighter when the market is at 20,000 and so the market can actually be cheaper at those levels.

Conversely, if the prospects for growth are muted going ahead, the market could be expensive even at 15,000.

So one useful metric with which to value the market is the price-earnings (P/E) ratio.

If you were bottom trawling, however, you could consider other metrics like the dividend yield. If the dividend yield is say 4-5 per cent, then it is worth buying these stocks because one is getting an assured return and over two years one can expect some capital appreciation.

What is the price-earnings (P/E) ratio?

The P/E for the market is typically the P/E for the benchmark index. One of the simple ways to arrive at the EPS for the 30-company Sensex: The EPS of each of the constituents is multiplied by its respective free-float market capitalisation. 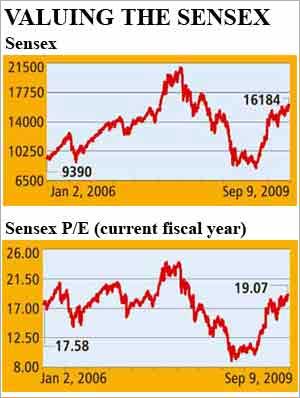 Then these numbers are added and the total is divided by the sum of the individual free-float market capitalisations.

That gives weighted EPS of the Sensex. To arrive at the Sensex P/E, the Sensex is divided by the Sensex EPS. Consensus estimates (typically the average of estimates from about 20 brokerages) for the Sensex are Rs 900 for 2009-10.

So, how does one judge whether the Sensex P/E is high or low?

The P/E ratio has to be benchmarked to the historical P/E of the country and also to the P/Es of peer group markets. India's historical long-term average P/E is close to 15. So, from a historical point, the Sensex is more expensive currently. India's peer group would include countries such as Taiwan, Korea, China, Brazil, Russia and other emerging markets.

As of now, Taiwan is among the most expensive markets in the region, trading at a current P/E of over 30 times mainly because the market expects a huge spurt in earnings of over 75 per cent in calendar 2010, following the recovery in the US economy.

What is the relation between P/E and interest rates?