Do Indian CEOs overpay themselves?

Eventually it boils down to whether Board compensation committees whose job is to fix salary levels have the power to question the CEO, especially owner-CEOs. 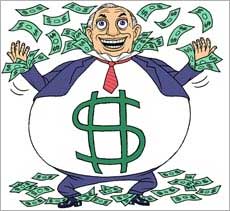 'In 2008, 570 directors got paid more than Rs 1 crore - this rose to 640 the next year. And the remuneration committee has virtually no power to fix compensation levels'

India's top honchos could not have had it better. High salaries, perks, fancy cars, club memberships, and a lot more are all for them to keep. A demand-supply gap for senior talent has resulted in very high CEO salary levels in good times and now, in tough times, these numbers have begun to look 'indecent'.

In the past, each person hired was benchmarked against the best available candidate and the best company, and this pushed up compensation levels to unreasonable limits, irrespective of competence. While CEO salaries grew with quantum jumps in profits and market capitalisation of companies, a fall in profits in recent times has not resulted in a proportionate fall in salary levels.

There are plenty of examples where loss-making companies continue to pay out crores to their CEOs. We saw an increase in number of crorepatis in the year-ended March 2009. There were 640 directors of listed companies who took home in excess of Rs 1 crore (Rs 10 million) in total remuneration compared to 570 in the previous year.

We often hear the argument about compensation levels of Indian CEOs being far less than what their their western counterparts receive. While discussing corporate compensation, the social context in India simply cannot be ignored. Against an average per capita income of around Rs 100 a day, we have some CEOs who make more than of Rs 12,00,000 a day!

As part of liberalisation, the government (rightly) agreed to allow the Board and shareholders of companies to decide compensation structures. Industry has abused this freedom, particularly in case of owner-CEOs. The Board remuneration committee and shareholders have practically no say in the matter as owners have controlling equity in the company. The real problem lies here. The license raj was bad, but the license to disturb the nation's social equilibrium is much worse and has serious long-term social consequences in a country like India.

'Indecent' may be a strong word, but their actions are certainly not fair, equitable or socially acceptable. In times of difficulty, CEOs need to set precedents with their actions and be an instrument of change. Instead of the government asking them to show restraint, they themselves should refrain from vulgar display of money.

India respects Ratan Tata, Narayana Murthy and Azim Premji for their moderation, professional conduct and value systems. If the affluent class gave back to society, this would not only showcase leadership, it could help restore confidence and even increase their brand value. In the west, we see examples like Warren Buffet and Bill Gates who have contributed a substantial part of their wealth to the public good.

Some of our top industrialists get great pleasure in seeing their name in the list of highest-paid CEOs, but this flies in the face of our socio-economic conditions, Indian culture and sense of natural justice. Owner-CEOs are misusing their position and authority and, at some stage, society is bound to revolt.

Such misguided CEOs must judge their own action. I think their 'antaraatma' will tell them what is wrong and what is right. Lot of introspection and self-correction is urgently needed, but this doesn't mean government regulation is the solution. At the end of the day, it must remain the responsibility of management to strike a fine balance and keep the sensitivities of the masses in mind.

'The CEO is the person whose job is to deliver value for shareholders - if the compensation structure is not adequate, how do you secure the CEO's commitment?'

Indian CEOs are a hardworking lot. They have a simple attitude, perform their role diligently, are emotionally involved in their mission and closely link success in their lives to the success at the workplace. They are available 24x7 to resolve their company's problems. They all are experiencing and leading a tremendous phase of growth as part of the nation-building that we are witnessing.

India has finally come of age in terms of professionalism and growth of business enterprise. Such stupendous growth results in employment, skill enhancement, trained manpower and provides a competitive edge to the nation in global markets.

All these would not have been possible but for shareholders who invest risk capital, professional teams who manage the risk capital and the CEO who takes the brunt of both sides of the equation. S/he is answerable to the shareholders and also should strive to keep the team chugging along. CEOs, being such an important link in the overall equation, deserve to be paid for all their intellect and leadership.

In general, the CEO compensation in India has been commensurate to the growth in size and scale of operations. If today's CEO earns Rs 1 crore for managing a Rs 1,000-crore (Rs 10 billion) business enterprise, no one can say this is undeserving. Apart from this compensation, there are other throw-ins such as stock options and long-term bonuses - the rationale behind these additional sops is not to over-compensate the CEO, but to ensure that there is a long-term commitment to the firm.

There are two types of gulfs that get created in India due to the natural progression in compensation structure. The first-type is the intra-firm one - in this case, the compensation of the CEO is compared to that in the level below, and so on. It is not surprising to have a CEO earn almost twice or more as compared to his direct reportee.

This gulf makes the co-existence uncomfortable and often leads to non-alignment in the team. I think India is working towards moderating this gap.

The second type of gulf is between the compensation in certain sunrise sectors versus the traditional sectors. Whenever there is a sunrise sector emerging out of the horizon, there is a gold rush of talent into the sector. We saw IT, ITES, real estate, stock broking and so on which went through this tremendous buoyancy in compensation.

This gap between elite and non-elite sectors results in shortage of talent for the traditional sectors which, ironically, are the guts of the economy. Prudent compensation plans drawn up with the help of HR and industry associations should ensure both the intra-firms and inter-sector gaps are narrowed down.

The flip side of high-salary growth is that it naturally fuels ambition and many less deserving CEOs get into the spiral of demanding more compensation and positioning their background credentials aggressively to attract more compensation. This spiral of chasing compensation is avoidable. Hence the deserving CEO should get 'to eat what he shoots'. At the other end of the spectrum, the greedy new culture will always result in an opportunistic spike in salary but over a period of time, it will not sustain.

In the continuing war of talent, CEO salaries will always find a level based on merit, contribution and growth.