The 'always on' multi-tasking approach to work reduces efficiency levels - a new study suggests ways around it, Shyamal Majumdar

A bewildering blizzard of email, phone calls, yet more email, meetings, projects, proposals and plans. This must be familiar territory - your average day at work. 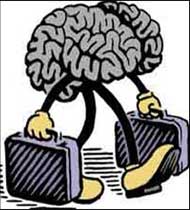 But if you are finding this increasingly overwhelming, help is at hand. David Rock, a consultant and leadership coach who advises corporations around the world, has collaborated with world-renowned neuroscientists to find answers to the following: Why do our brains feel so taxed, and how do we maximise our mental resources; why is it so hard to focus; how do we manage distractions better and keep our cool in difficult situations; collaborate more effectively than others; and get more effective at changing other people's behaviour?

In his new book Your Brain at Work, launched in New York yesterday (the India release is scheduled a month later), Rock doesn't drown the reader in complicated science. Instead, he travels inside the brains of the two main characters as they attempt to sort the vast quantities of information they're presented with and figure out how to prioritise, organise and act on them.

Rock says while the brain is exquisitely powerful, it has some surprising performance limitations as well. And even the brain of a Harvard graduate can be turned into that of an eight-year old by being simply made to do two things at once. The idea then is to develop more brain-smart approaches to everyday challenges.

Making decisions and solving problems rely heavily on a region of the brain called the prefrontal cortex. It's the part of your brain central to the thought process. But it's important to remember that prefrontal cortex doesn't have infinite capacity, so each time you use it, you need to allocate it to something important. For, you can't keep on making brilliant decisions all day long in the same manner a truck driver can drive all day and night, his ability to keep going limited only by his need for sleep.

Companies often mistake brilliance for the person's multi-tasking abilities. But the reality is different. A study done at the University of London found that constant emailing and text-messaging reduce mental capability by an average of 10 points in an IQ test.

The irony is despite research findings that 'always on' may not be the most productive way to work, managers continue to stretch themselves to do more at the same time even though the benefits they receive may be minimal.

Rock says if you push yourself, in the short term, being 'always on' can seem as if you are being productive. The cost on the brain, however, can be significant. Your brain may be 'parallel processing' - taking in multiple streams of data, but not doing much with it. Result: Whenever you multi-task, and more than one task requires any amount of attention, accuracy goes down. Besides doing only one thing at a time (which most people who show off the fact that they receive 200 email a day will simply scoff at), what's the other solution?

Rock says the idea is to use another part of the brain called the basal ganglia which takes care of routine activities that don't require much mental attention. For example, driving a truck doesn't require much use of the prefrontal cortex, unless you are a new driver, in a new truck, or on a new route.

But using the basal ganglia, which is highly efficient at executing patterns, involves guidance and quite a bit of mental training. Your Brain at Work helps you in doing this. One way of keeping your prefrontal cortex energised enough is to experiment with different timings. One technique, Rock says, is to break work up into blocks of time based on type of brain use, rather than topic.

For example, if you have to do some creative writing in several different projects, which requires a clear and a fresh mind, you might do all your creative writing on a Monday. People don't tend to do this - they tend either to work on one project at a time, or to respond to issues as they rise, sometimes thinking at a high abstract level, sometimes at a more detailed level, and then sometimes multi-tasking and switching around a lot.

Instead, you could divide a day into blocks of time when you can indulge in various activities: Thinking such as creative writing, other blocks for having meetings, and other blocks for routine tasks such as responding to emails. The bottomline is: Your ability to make great decisions is a limited resource and it's hard to be in a zone of peak performance continuously. So conserve this resource at every opportunity.

Rock says his book may open a door for many people to an exciting new way of thinking. Your Brain at Work does much more than that.