Divestment without a purpose

Only strategic sales can serve the purpose of disinvestment, by freeing PSUs from govt control, writes A K Bhattacharya.

When divestment of government equity in public sector undertakings began in 1991, the controversy around it centred on two points. Should the government be selling its shares in PSUs and thereby pave the way for their privatisation? And should the proceeds from such divestment be used as government receipt to reduce its fiscal deficit? 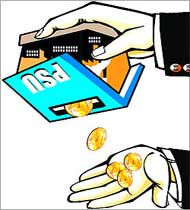 Most political parties and even sections within the government were opposed to the idea of divestment for ideological reasons. The Left would say offloading government shares in PSUs was like selling the family silver. Within the Congress, a few leaders opined that disinvestment amounted to burying the ideas of Jawahar Lal Nehru, who believed in a strong and dominant public sector.

Even liberal thinkers scoffed at the idea, as they argued that such divestment was a myopic strategy of raising some resources for the government without really ensuring any real autonomy for PSUs.

The second controversy was triggered by the International Monetary Fund, which had helped India recover from an economic crisis with a stand-by loan and hence had a say in how the government managed its finances. The Fund insisted that the government could not treat its divestment proceeds as revenue while calculating its fiscal deficit.

Later, however, it relaxed its stance. The PV Narasimha Rao government heaved a sigh of relief, as indeed the task of reducing its fiscal deficit became a little easier with divestment proceeds. The government treated it as a minor victory of sorts, even though it was widely acknowledged that such revenues indeed should give no comfort to anyone from the fiscal prudence point of view.

How times have changed since then! Almost two decades later, divestment decisions are being taken without a trace of those controversies. Not that political parties have changed their views. If there is any change, it is in the economic and political environment, which has rendered such controversies almost irrelevant.

With several governments, including those in the developed world, discarding the principles of fiscal prudence in their attempt to introduce stimulus measures to revive their sagging economies, the arguments in favour of observing fiscal prudence have lost their appeal.

Indeed, the Pittsburgh summit of the Group of 20 countries agreed on delaying the phase-out of stimulus measures, as the global economy was not yet out of the woods. Not a word was spoken on the rising fiscal deficit and the need to restore fiscal balance.

In India, the political environment has been such that the key opponents of PSU divestment, the Left parties, have no levers of influence on the United Progressive Alliance. As long as the Left parties were part of the UPA between 2004 and 2009, divestment of government equity in PSUs had become a low-priority item on the government's agenda. The total proceeds from disinvestment during those five years amounted to only about Rs 6,700 crore, compared to over Rs 33,650 crore during the preceding six years of Vajpayee's rule.

The significance of Monday's decision to approve a five per cent equity divestment in National Thermal Power Corporation, therefore, lies in the manner in which the Manmohan Singh government has revived its divestment plan without anyone striking a discordant note. While this may augur well for the finance ministry, which will see its revenue kitty swell by over Rs 8,000 crore (Rs 80 billion), it is logical to ask what purpose such disinvestment will actually serve.

Is divestment meant only to help the government raise some more revenue? Or does it have a larger purpose of imparting greater autonomy to the public sector so that it can be run without any political interference and with greater efficiency?

Since 1991, the various modes of divestment have helped mobilise over Rs 51,600 crore (Rs 516 billion), all of which have primarily helped control the government's fiscal deficit. Only about Rs 6,300 crore (Rs 63 billion), or about 12 per cent of the total divestment proceeds so far, have come from strategic sales.

It is logical to argue that only strategic sales can come anywhere near serving the real purpose of divestment by freeing PSUs from government control. In the remaining cases, the government through its ministers and bureaucrats continues to manage the running of the PSU concerned, even though it may have diluted its equity in them over the years to meet its overall revenue needs.

A five per cent sale of government equity in NTPC will mean the continuation of the flawed and half-hearted approach towards divestment as seen in the past. The danger is that such an approach can give the whole exercise a bad name and an opportunity to its detractors to cite this as another reason for debunking it.

'PV': A scholar, a statesman