Jet Airways' pilots won't get much sympathy, but the management hasn't quite covered itself in glory either, writes Shyamal Majumdar.

In July, last year, 18 China Eastern flights took off on time from the Kunming airport. While some turned around in midair, others reached their destinations but flew back immediately without letting passengers off. It was the pilots' way of protesting against poor pay, tough schedules and lifetime contracts that they can break only by paying a fortune. 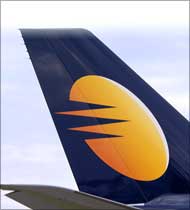 Some of the pilots were sacked, but the nation's third-largest airline also had to pay heavily with its reputation and a few domestic slots. A similar thing happened with Shanghai Airlines where 40 captains asked for sick leave at the same time. Two weeks later, 11 of their counterparts at East Star Airlines did the same.

Thankfully, Indian aviation has not seen anything like what happened with China Eastern. And HR experts say more than management action, the fear of public fury has prevented such a drastic action on the part of airline employees in India.

However, that hasn't stopped Air India's pampered pilots who have a long record of holding the airline to ransom during critical periods. The airline's bloated workforce, for instance, is known to have sabotaged every single turnaround plan that the management has formulated so far - consider their blind opposition to the latest such plan formulated by the new management, confirming the impression that they have been humoured by successive weak managements for far too long.

The context is vastly different, but it's highly unlikely that the pilots of Jet Airways who have threatened to strike work in their protest against the sacking of two of their colleagues would get either public sympathy or legal backing.

It's significant that the only support they have got so far is from the Aviation Industry Employees' Guild, the largest employees' union in Air India.

The Regional Labour Commissioner has already warned the newly-formed National Aviators Guild, an association of Jet pilots, against going on strike, saying it would attract legal action as the airline is a public utility.

Jet's pilots surely know the legal position and hence their repeated threats of going on strike are nothing but public posturing designed to embarrass the management, which didn't exactly cover itself in glory by its inept handling of mass retrenchment of employees a year ago and the subsequent televised withdrawal of the retrenchment order under pressure from politicians.

Irrespective of the success of the strike threat, the fact is that unionism has finally entered private airlines. Jet has had an association of pilots called the Society for Welfare of Indian Pilots, to redress employee complaints since 1998. However, unlike Air India - Air India has13 recognised unions with affiliations to political parties of all hues - it has never faced worker unrest or a strike threat.

That has changed forever with the pilots converting SWIP into a union and demanding immediate reinstatement of the two sacked pilots. While Jet hasn't given any reason for its action, the union has been vociferous in claiming that the pilots were sacked as they were instrumental in forming the union.

HR experts say Jet probably under-estimated the potential crisis and allowed the situation to worsen by summarily dismissing the two pilots without making the real reason public - a classic case of failure of the HR in defusing a crisis situation.

HR experts also say managements should lead by example. "The Jet management has no business to punish employees for indulging in trade unionism. The management itself took a leaf out of labour union books when it joined other private airlines recently in threatening to suspend operations if the government did not give in to their demand for a bailout package. That behaviour was almost like militant trade unionism," one HR consultant says.

Never before did an entire industry threaten to pull out from the market to arm-twist the government into toeing its line. The threat, however, was never carried out.

Though the Federation of Indian Airlines said that the decision to call off the proposed strike was because of the potential inconvenience that the suspension of flights could have caused to thousands of passengers, the real reason was something else: As many as four airlines - MDLR, Paramount, Spice Jet and IndiGo - backed out and withdrew their participation in the protest.

It also came after the civil aviation minister warned the private airlines, which were participating in the strike, of punitive action for causing inconvenience to passengers.

Was there much difference between the behaviour of private airline managements and unreasonable trade unions? Hardly.