News
Business
Movies
Sports
Cricket
Get Ahead
Money Tips
Shopping
Sign in  |  Create a Rediffmail account
Rediff.com  » Business » Why India Inc is both upbeat and wary 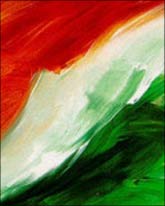 India Inc is heaving a sigh of relief after a year-long run on liquidity but is cautious after former US Federal Reserve Chairman Alan Greenspan's remark that the world will suffer another financial crisis.

At least for now, the corporate sector heads feel that India is better placed than the rest of the world as most of the sectors are witnessing a revival of demand, the stock markets have bottomed out and foreign investors are upbeat on the country.

The global financial downturn is receding into the background after industrial production showed a strong growth for the second month in a row in July.

The commercial vehicles segment, the key indicator of economic health, is keeping its head high with a slew of car launches. Sales in the segment crossed the 1 million-mark for the first time in the current financial year in August.

The launch of affordable houses by big developers at prices 25-30 per cent less than the market rates has led to a revival in demand in the real estate sector. With crude oil prices recovering, the momentum is back in the oil and gas segment.

Venu Srinivasan, chairman and managing director of TVS Motors, said, "The speed of recovery is better than expected. However, India can get back to 8-9 per cent growth rate only in 2010-11 because the US economy is yet to stabilise while Europe is recovering. It may be a year away."

It appeared that the government's stimulus measures were offsetting the impact of drought, said Citigroup Global in a report, adding that the industrial growth figure for 2009-10 could be better than expected.

GMR Group Chief Financial Officer A Subba Rao said the first sign of recovery was availability of funds. "Banks are now ready to fund projects. Interest rates are softer. The valuation of companies has increased with the market capitalisation. Now, all worries centre on inflation. The companies are concerned whether the central bank will go back to sucking liquidity from the system to tame inflation," he added.

Another concern is monsoon and its impact on agricultural production.

"As far as recovery is concerned, we can see that the August industrial production figure is quite solid at 6.8 per cent, although a poor monsoon this year has impacted the kharif crops. Whatever is lost is lost but we are expecting a reasonably good rabi crop," said Srinivasan.

The sub-prime mortgage crisis, which later snowballed and caused the world's greatest financial meltdown, took its toll on the Indian real estate market with property sales slowing and affecting the financial condition of real estate developers.

"While demand has revived in the residential segment, the office space has seen enquiries from buyers of late. But retail real estate will see some action only after the full economic recovery," said Rajiv Talwar, group executive director, DLF.

He anticipates a complete recovery in the real estate market in two years.

Subba Rao said former Federal Reserve chairman's comment could not be ignored. "Companies still have to be cautious as the fallout of inflation is unpredictable. Central banks have injected steroids into the system to weather the downturn. At present, nobody knows the side effects of creation of artificial liquidity," he said.

Greenspan, who earlier predicted that the crash would come as a reaction to a long period of prosperity, told BBC this week that the crisis of a different nature would happen again. Srinivasan said, "I am not sure why the collapse should not happen again."

Although it is not a reflection of the best that the industry can post, the Confederation of Indian Industry (CII) believes that a definite turnaround has started and the next two quarters will see industry becoming more robust and plan capacity addition and investments.

No slow down in production: India Inc