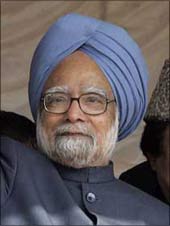 Prime Minister Manmohan Singh, 76, will be flying for more than 30 hours in the coming four days to attend the third summit of G-20 countries in Pittsburgh in the United States. He will leave on Wednesday for Frankfurt, Germany, on his way to the United States.

However, for the economist prime minister this G-20 Summit will be a pleasant one because the economic indicators over the last two months reveal that the world might be limping back to recovery.

The prime minister will reach the US on the afternoon of September 24. The G-20 Summit starts with a reception followed by a dinner to be hosted by the US President on September 24.

On September 25, the programme includes a summit plenary, a leaders' lunch and ends with a concluding plenary in the afternoon. The prime minister will leave Pittsburgh the same evening.

During his stay, the prime minister will have interactions with the leaders of participating countries.

The Group of 20 has been around since 1999 when the East Asian financial crisis forced finance ministers and global financiers to sit across the table to discuss issues of global financial structure.

G-20 is an informal forum comprising major developed countries and leading emerging market economies representing around 90 per cent of global GDP, 85 per cent of world trade and two-thirds of humanity.

The first meeting of G-20 leaders on financial markets and the world economy was held in Washington DC on November 15, 2008 when the then US President George Bush had lost all political steam and Barack Obama was emerging on horizon.

The first G-20 was necessitated due to the total failure and collapse of many American financial institutions that led to global economic meltdown. The summit's prime purpose was to restore the absolute erosion of confidence amongst investors and markets. The G-20 leaders discussed some measures to combat the crisis and restore growth. They also launched an action plan to attain the set goal.

The second G-20 Summit in London, on April 2, 2009, was more specific and ambitious in its action. It pledged to mobilize $1.1 trillion in resources for international financial institutions to sustain growth in emerging markets. Prime Minister Manmohan Singh attended both the summits and advocated strong regulatory mechanism.

India also suggested many steps for to bring about global financial stability and to strengthen banking systems.

It is claimed that the $ 1.1-trillion stimulus package announced by G-20 countries during the London Summit in April 2009 was instrumental in keeping the world from plunging into a full-blown depression. Recent global economic data point towards a continuous global economic recovery. Germany, France, Japan are out of recession and the US economy too is also showing signs of some life.

Speaking about the G-20 Summit, Foreign Secretary Nirupama Rao said in New Delhi: "The steps taken by the G-20 to augment the resources of the multilateral development banks (MDBs) has led to substantial stepping up of World Bank lending to India. Likewise, the G-20 pressure on the Asian Development Bank (ADB) to enhance its capital is likely to increase infrastructure funding for India. The steps taken by the G-20 to stabilise financial markets and the global economy can be expected to lead to an early revival of private capital flows, and a step up in domestic growth through revival of external demand and exports."

It is argued that the previous G-20 meetings in Washington and London ended with vows to resist protectionism and to push for a sustained and a coordinated fiscal stimulus for the global economy.

G-20 has largely been successful in delivering on these two objectives. However, on issues related to financial sector reforms, the conclusion of the Doha Round, IMF and World Bank reforms, among others, G-20 leaders have not been able to convert their words into action.

Stating that the last year was a challenging time for the global economy, he argued that the economic signals over the last two months point towards a continuous global economic recovery. The Washington and the London summits have been largely successful in addressing the global financial crisis. The Pittsburgh meeting is therefore expected to find answers on how the major economic powers can work together to ensure balanced growth and at the same time work and coordinate closely so that this such a crisis can be avoided in future.

The issues on the table

In Pittsburgh, instead of focussing on additional economic stimulus, the G-20 leaders are expected to dwell on exit strategies from the stimulus. They are expected to focus on reversing the explosive monetary and fiscal expansion of the past two years.

However, the challenge would be the decision on timing for such a withdrawal, which should neither be too soon nor too late and should be done in a coordinated manner. An early withdrawal of a stimulus might stifle the impending global economic recovery, whereas a delay in withdrawal may lead to a surge in inflationary pressures when aggregate demand begins to pickup.

The timing of stimulus withdrawal is likely to be one of the key issues at the G-20 meeting in Pittsburgh, according to an expert.

With major economies in Europe and Asia officially out of recession, the discussions are expected to focus on co-ordinating the withdrawal of billions of aid and stimulus measures that were injected into countries by their governments over the past year.

Another issue that may figure prominently in the talks is the fear of increase in protectionism. As the world economy escapes the grips of recession, there are signs of reassertion of national self-interest.

The recent imposition of 35 per cent tariff by the US on imported Chinese tyres is a reflection that the pressure to work together among countries is reducing and the danger of protectionism is on the rise again.

The outcome of the deliberations in Pittsburgh may, to a large extent, determine whether these major economic powers, with diverse interests and economic stature, can continue to think collectively.

Other issues that may figure in talks could be the issue of climate change, terrorism, poverty, et cetera.

Although the Pittsburgh summit is not a negotiating forum, the issue of climate change is expected to figure in a big way among the leaders as nations prepare themselves for the Copenhagen Summit sponsored by the United Nations in December this year.

What will the prime minister do?

India has been an active and a key participant in G-20 discussions right from the beginning when the G-20 forum of Finance Ministers and Central Bank Governors was established in 1999. It has a dominant role to play in G-20 talks, which is also very important for its long-cherished ambition of a becoming dominant player in global arena.

India would like the upcoming G-20 Summit to discuss on ways to prevent regulatory failures that led to the economic crisis from recurring.

Financial market reforms will be a central issue at the summit and India would like to play a pro-active role in this issue.

One is not sure whether China and India will be on the same page, so to speak, on major issues at the G-20 Summit. It will depend upon the issues that will be discussed during the G-talks.

India and China are more or less in sync with each other on issues related to international financial sector reforms, including reforms in global financial institutions like IMF and World Bank. The two countries have a similar position on the issue of climate change, which is based on the principle that the 'polluter must pay'.

India is expected to utilise the opportunity at the G-20 meeting to press for changes in the international financial architecture through reforms of the global financial institutions, like IMF and World Bank, so that the voice of poor and emerging economies gets heard.

India may also raise the issue of rise in protectionism being embraced by developed countries and the damage it has done to the developing nations' economies.

"Given India's limited share in global gross domestic product and world trade (about 2 per cent and 1.5 per cent, respectively) and the relatively insulated and over-regulated state of our commercial banking and financial system, we are not really affected by the global cycles and events," says an Indian economist studying G-20 countries' data.

He believes that it may not be correct to say that India's role in global economy is exaggerated. Home to one-third of the mankind on earth, India is widely seen as the voice of poor and developing countries of the world.

The fastest growing democracy in the world, India's GDP growth rate of above 9% until 2008 was second only to that of China. The growth rate of 6.1% during the first quarter of current fiscal year shows that it has weathered the financial downturn bravely.

India is among the major players at all international forums: WTO, UN, IMF or World Bank. With a favourable demographic profile, India is set to play a major role in global affairs in years to come.

However, Anjan Roy, economic advisor to FICCI, differs. Speaking to rediff.com, he said: "India is a small player. I don't think we can play a big role at G-20. Our role will be at the minimum level because our GDP is not big enough to impact global trends."

"India has more say than its economic worth warrants. It is a kind of mystery to me how India is perceived by others. There is a notion that India has certain ideas to overcome financial problems. India is not a giant global economy yet. India is gaining a lot of attention not because of money. I think, it is India's soft power that attracts people to Indian views."

Be that as it may, let us now see how the prime minister personifies India's soft power in the tricky world of economy.