The consumer is spending increased time on-ground and online, he is ready to consume messaging in the last mile -- the smart marketer has to evolve to stay relevant to the changed consumer, says Vijay Singh. 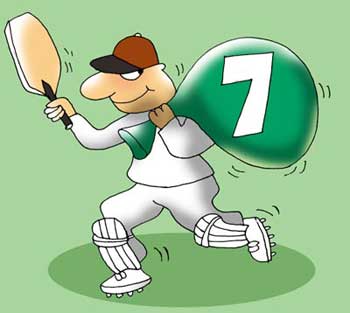 The fact that the game of cricket is evolving is an understatement. There was a time when it used to be a gentleman's game with a six-day fixture -- five days of the game played at a leisurely pace with a rest day in-between; and of course, all the lunches and tea breaks.

The rest day kind of disappeared and it became a five-day game. Then there were the shorter three-day formats which did not seem to catch on, after which emerged the one-day limited-over format which became all so popular. Even the limited overs were experimented with and changed from 60 overs a side to the current 50.

There were, of course, enough voices of protest against this rash format of cricket from the lovers of the classic format. But the increasing popularity of the one-day game gradually silenced those voices. Quite like what Viv Richards said in 1988, "One-day cricket is like fast food. No one wants to cook."

Then came the day and night format for the limited-over game to ensure that office goers get the time to enjoy the game in the evening. And now, the one-day game has evolved to its current favourite format of 20/20 overs -- three to four hours of hard-hitting, adrenaline-pumping, outright fun.

The cricket whites have given way to colourful jerseys, hot and scantily dressed cheerleaders, music on the stands, unique rules to make the game more unpredictable and pulsating, and, above all, packed stadiums with the audience sitting on the edge of their seats (and in front of the screens), expecting mayhem on the field. And I am sure the game will keep changing and evolving.

When you compare the five-day format to T20 cricket there seems to be very little in common -- other than the fact that it is still cricket. Ask any serious cricket player and he will swear by the five-day format -- it being high on strategy, mental strength, physical endurance, technique and so on. And yet the format is having survival problems. So what brought about this change in the game?

The audience changed the game. Simply, they wanted it faster, quicker, rougher and result-oriented. They were bored of the long-drawn game, and the draws and predictable results.

And since the audience started to stay away from the traditional game, so did the sponsor, and hence the media. The entire ecosystem of cricket, including the players, had to adapt to the new game formats to stay relevant in the minds of the audience. You either play by the rules of the audience or you perish.

Marketing is no different. There was a time when the consumer had limited choices -- both in terms of the products, and brand availability as well as the media options.

In those days, the traditional marketing methods worked. You had to make the consumer aware of the product/brand and he would almost line up and buy. He would walk up to the local store, ask for the product by name (based on the highest brand recall) and the shop-owner would hand it over across the counter.

And hence the awareness-driven media options ruled the world of marketing. Mass media-based advertising did the trick: Television, print, radio and outdoor were it. The more you could yell, the more you would sell.  Innovative "yelling" of course increased brand awareness and perhaps sales.

The consumer had little choice and was glued to the limited media options. He would consume almost anything you threw at him. It was here that the TV 'peak hour' became an obsession with brands and agencies alike, and TRP ratings became something worth killing for.

While this might sound like a 1980s and 1990s scenario, the focus of the marketing fraternity has largely stayed with the above mindset. The belief continues to be that the customer's path to purchase is linear -- make him aware using mass media, he will visit the store, and he will buy.

Today, however, the consumer has changed. He no longer consumes media the way he used to. He has choices, he is no longer captive to traditional media options, and he has the power of choosing what he wishes to consume, when and how. He has too many product and brand choices and is short of time.

This individualist and peer group-based view of the consumer makes him wary of 'one message for all' broadcast formats of media and he prefers a more narrow-casted, relevant to him (and his peers), one-on-one communication methods. Not only does he prefer it, he now has the means to enable it.

So while the consumer has evolved, a large number of brands are still using business models which have been around for decades and seem to be dominated by single-minded focus and hence measure of 'counting the reach'.

Communication strategies for most brands still seem to be dominated with the awareness intent, rather than the conversation intent.

The consumer's path to purchase today is anything but linear. Because the media consumption patterns and 'media' have changed, the information flow has so many varied touch points, and the brand experience originates from so many varied sources, that dependence on mass media as the starting point of brand communication initiatives is wrong.

However, for most brands, the desire to ensure awareness has lead them to follow the strategy of being ubiquitous, spending enormous sums of monies on painting every conceivable OOH surface in their brand colours, interjecting every content format by repetitive commercial messaging -- the more the merrier -- and that's exactly what the consumer is turning away from, quite like the five-day cricket game.

Most of the brands (and their agencies) are still playing the five-day game, while the consumer is playing T20.

Take, for instance, the tyre category (or television, mobile phones, telecom services, or you name the category).

Irrespective of your interest/intent in purchase of a new tyre, you would be wooed by all the brands during your daily television time, you would see them sponsoring soap operas, news shows, talent reality shows, beauty contests, games, the damn blip or what have you on television, and so on. If you drive through the hinterland, you will need to put in an effort to find a wall, which has not been painted by brands, including tyres.

All this and more with an intent to make the consumer 'aware', then even 'more aware', and then to try and drown him in 'awareness'.

The consumer, on the other hand, while he values awareness, in majority of the cases will base his decision not on the painted walls, nor on the number of times he saw the logo on TV, but on his own inferences drawn based on his own unique path to purchase, which could be a combination of  peer group recommendation and reviews (both offline and online), store visits followed by online searchers, retailer's recommendation, mechanic's recommendations and other relevant dialogues, conversations and interactions he has at the relevant touch-points which are focussed within the last mile, or on social networks both offline and online.

This evolution in the consumer's path to purchase has meant that the marketing rules for brands, like cricket, have changed forever and like Tony Greig said, "Cricket the world over, I don't think, will ever know how different things would be without Kerry Packer."

The consumer is spending increased time on-ground and online, he is ready and willing to consume messaging in the last mile -- the smart marketer has to evolve to stay relevant to the changed consumer. You either play by the rules of the audience or you perish.