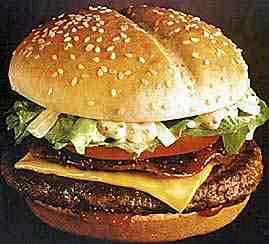 McDonald's has had to innovate its way through India: Vegetarian fare, home delivery, breakfast menu, extended hours and so on.

As a result, the McDonald's model in India looks very different from anywhere else in the world. Most of these steps have added incremental revenue. The company is now all set to launch its web-based delivery service in March.

As a concept, McDelivery, or free home delivery of meals, is not new in India. In fact, the company first launched it in Mumbai way back in 2004. McDonald's now wants to take it to the next level.

"It's an important strategy for us. Convenience to customers is core for us and we want to take delivery to the next level," says McDonald's managing director (western region) Amit Jatia.

McDonald's has two joint ventures in India: One with Vikram Bakshi for the North and East and another with Amit Jatia for the West and South.

The two companies collaborate on marketing (single creative and media buying agency), menu and supply chain management. Together, they run 180 McDonald's outlets in the country.

For McDonald's, home delivery in Mumbai began as an experiment. The company then put in three years to study and work out the possibilities in other cities.

A little less than a fifth of this market is with quick-service restaurants. Lifestyle trends show that more and more people prefer to order food home from such restaurants. The biggest advantage is convenience.

Hot boxes ensure that the food does not go cold. Most restaurants, aware that this increases their sale, charge nothing extra for home delivery. With the number of working women on the rise, the business has got a huge lift.

Though it means investments in two-wheelers and insulated boxes to keep the food warm, and parking lots adjacent to the restaurant, most fast-food chains have gone for it.

But home delivery is not inexpensive. McDonald's runs a sizeable call centre for this purpose. It takes the order from the customer and then forwards it to the nearest outlet.

Rush hour can see the lines to the call centre clogged. So, it decided to run a pilot on the web.

The reason is not difficult to find: This eliminates the call centre from the transaction and therefore makes it more efficient.

Of course, the cost comes down as well. The city selected was Hyderabad, for long the chosen market for test launches.

What also helped McDonald's case was the large net-savvy population of the city -- it is the second largest information technology centre in the country after Bangalore.

The stint in the four stores across Hyderabad brought home two learnings. One, it is better to offer web-based delivery to customers who visit the restaurants.

"We prefer if people visit and experience us and then go ahead and use us for delivery," says McDonald's director (supply chain and new business models) Abhijit Upadhye. Two, there can be prank orders that need to be weeded out.
To tackle that, McDonald's set up a process whereby orders above a certain limit (Rs 1,000) require cross-checking: The restaurant calls up the concerned person to validate the order. However, Upadhye maintains that such pranks made up a minuscule part of the web orders.

Satisfied with the outcome, the company will roll out the service in March across the 75 McDelivery cities in the country.

According to Upadhye, all that the customers have to do is register on the web delivery portal.

Once the location is entered, the website will determine whether the area comes under a delivery grid or not. The order gets registered if you are in the grid.

For that, the company conducts a detailed feasibility study to find out if a restaurant can become a delivery hub.

Every restaurant is given a population target. Only when it is certain that the outlet can serve a sizable population is it made a delivery hub.

Further, the delivery grid is modelled in such a way that the drive time cannot exceed seven minutes.

All this, of course, is in line with McDonald's larger strategy to boost its business.

"Ours is a low-margin, high-volume business, so we do everything we can to reach our customers," says Jatia. Indeed, the average ticket size is small -- in low triple digits with a quarter of the sales coming at the lowest price point of Rs 20.

The footfalls in India are amongst the highest in the world, but the average bill is amongst the lowest.

Web delivery, the company hopes, will add 5 per cent to sales. It is actively promoting the concept locally using fliers and by text messaging its customers.

However, the company will not use mass media to promote this service. The penetration of the web-based delivery model is not significant. For one, there are practical problems like finding a parking slot next to the store.

Another reason Upadhye is not keen to advertise is because a lot of customers may not fall within the delivery grid of a restaurant.

"That could leave them disappointed and we don't want that to happen. Nevertheless once we launch we'll evaluate what to do," he adds.

Jatia echoes the tentativeness of the scheme: "At some point we'll take the delivery model further. This is more of an interim step; we'll eventually take the final step that will make it even more convenient for customers."

It is still early days to comment on the success of the latest undertaking. In the past, some of McDonald's plans have failed to deliver.

Earlier, it had negotiated deals with the Railways and low-cost airlines to serve food. However, its food has to be eaten within ten minutes of preparation. So, the scheme remained a non-starter.

But if its pilot in Hyderabad is anything to go by, then the company has little to worry about.