Are there more IPCC goof-ups on climate change? 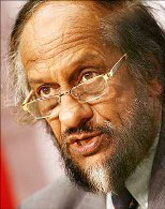 Whether it is the blunder over the glaciers or the linking of natural disasters to global warming, the IPCC's credibility has been badly hit. If this encourages laxity over global warming, that will be tragic.

Most scientific papers agree that the Himalayan glaciers are receding -- the IPCC goof-up shouldn't be used as a licence by big polluters to pollute.

Climate change deniers had a field day last week. A silly mistake in the Intergovernmental Panel on Climate Change (IPCC) report became yet another "proof" that climate change itself was a collective figment of the imagination of thousands of scientists, not to mention millions of people bearing the brunt of a changing climate.

On Himalayan glaciers, the IPCC (Chapter 10.6.2 of the Working Group-II) has clearly got it wrong by quoting a non-peer reviewed paper. Considering the science of climate change is still evolving (that is why the IPCC publishes its reports every six years, with clear segregation between robust findings and uncertainties), providing a definitive date is a goof-up. Yet, aren't Himalayan glaciers indeed receding?

Most scientific papers available on this subject agree on the following:

These findings are incontrovertible. They are in the 2009 Raina report, the one that Environment Minister Jairam Ramesh released, and in a yet-to-be-published report of the Glaciers Study Group, prepared under the guidance of the Principal Scientific Advisor, government of India.

But there's a difference. Whereas the Raina report says "many centuries of observations" are required to link glacial retreat to climate change, the study group concludes, "This combination of glacial retreat, negative mass balance, early melting of seasonal snow cover and winter time increase in stream run-off suggest an influence of climate change on Himalayan Cryosphere."

Glaciers will respond to natural processes, local and regional changes (deforestation, urbanisation, industrialisation) as well as global changes (increase in global temperature). Quantifying the distinct contribution of each is impossible.

But to say rising temperature has no impact on Himalayan glaciers would be irresponsible. To, then, say global temperature is not rising because of human influence would be ludicrous.

Bear in mind that the science of global warming is not under dispute (it is a simple science of greenhouse gas effects and changes in earth's energy balance); the observational evidence is. And there is lack of the latter because there isn't sufficient research on all aspects of global warming and the changing dimensions of the climate system, especially in developing countries.

We need to know more about what is happening in India on climate change. We need funds and institutional capacity to drive such research. But this should not stop us from preparing ourselves for an eventuality: Glacier melting will impact the water regime of our glacier-fed rivers -- more than 500 million people depend on these rivers.

More crucially, this should not lead us to deny climate change. Healthy dispute is good for the advancement of science, denial is not.

At Copenhagen, these polluters took no action. In fact, we joined their gang and became a party to their inaction by supporting the Copenhagen Accord. But, the spectre of legally binding targets still hasn't vanished for them.

In this context, they would be very happy to encourage the kind of climate change scepticism they have unleashed since 1990, all over again (the 2007 IPCC fourth assessment report was a disaster for them). Indeed, the idea is to, once again, push for a complete denial of climate change.

We cannot allow this to happen. The media has found its first post-Copenhagen crisis, but its reportage should not enthuse climate sceptics; its enthusiasm in tripping up the IPCC report should not become grist to the climate change-denying mill. After all, the principal climate change deniers are in the US, the UK and Australia -- the big polluters.

Today, if we fall into their trap and give them the licence to pollute, we will pay dearly in the future.

It's not just glaciers, the IPCC is generally alarmist -- linking global warming to natural disasters is another such example

For the last 20 years, one IPCC report after another has been responsible for a relentless outpouring of doomsday predictions. The IPCC process, however, by which it arrived at its alarmist conclusions, has been shown on numerous occasions to lack balance, transparency and due diligence.

The IPCC's work is controlled by a tightly-knit group of individuals who are totally convinced that they are right. As a result, conflicting data and evidence, even if published in peer-reviewed journals, are regularly ignored, while exaggerated claims, even if contentious or not peer-reviewed, are often highlighted in IPCC reports.

Not surprisingly, the IPCC has lost a lot of credibility in recent years. It is also losing the trust of more and more governments who are no longer following its advice -- as the Copenhagen summit showed.

Claims by RK Pachauri, chair of the IPCC, that IPCC's erroneous doomsday prediction about the fate of Himalayan glaciers was an isolated, and wholly uncharacteristic mistake, are completely baseless.

There is ample evidence to show that the IPCC review process is neither robust nor transparent. In 2007, when the IPCC published its latest report, the Panel claimed that global warming was to blame for an increase in the number and severity of natural disasters such as hurricanes and floods. Yet the paper on which the IPCC based its assertion had not been published at the time.

When it was finally published in 2008, its conclusion contradicted the IPCC's false alarm, stating: "We find insufficient evidence to claim a statistical relationship between global temperature increase and catastrophe losses."

Not just in this case, but on other contentious issues, the IPCC has consistently promoted alarmist predictions. On issues such as the possible affect of global warming on malaria, human health or national economies, IPCC authors habitually prefer to cite alarmist papers while research findings that come to less gloomy conclusions are often disregarded.

In the latest instance, the GWPF has just released details of the defective process by which the 2035 Himalayas date got into an IPCC report. As a result of a Freedom of Information request, David Holland, a GWPF researcher, gained access to the responses by IPCC's lead authors.

The documents show that most doubts and questions that were raised about the 2035 date were ignored and that the review editors failed to take any note of it.

But even where the IPCC relies on peer-reviewed papers, it does not guarantee that its claims and conclusions are reliable or trustworthy. As the notorious "hockey stick" controversy about temperature reconstructions has shown, IPCC contributors have consistently failed to disclose their data and methods while the IPCC has consented to such misconduct.

The Panel's inner circle has been characterised for many years by an endemic bias towards alarmist assessments and calls for radical action. There are growing concerns among many governments about the way the IPCC works and how it produces its conclusions.

Its demand for drastic economic changes is posing a serious political predicament for many governments, not least in India. After all, most countries find themselves unable to control, let alone reduce, CO2 emissions, as realistic alternatives to cheap fossil fuels are non-existent. It is this concern about the potentially-destabilising consequences of the IPCC's radicalism based on unbalanced and unreliable professional advise that has led to calls for a reform of the IPCC.

The IPCC's agenda and its catastrophic framing of climate change is mainly driven by western government departments staffed by green ministers, civil servants and researchers, many of whom have strong personal backgrounds in environmental campaigning and ecological ideologies.

Any significant IPCC reforms will ultimately depend on the economic and political cost of its workings and how it threatens the stability of national economies.

The Indian government has more or less conceded that the radical actions promoted by Pachauri and the IPCC are threatening to undermine realistic government policies. The price of climate hysteria has eclipsed the value of political and economic stability. The time has come to completely overhaul the structure and workings of the IPCC. Unless it accepts to undergo a root and branch reform, it will continue to haemorrhage credibility.