Rising gold prices? Blame it on the Greek debacle

Already dearer, gold is set to appreciate in the aftermath of the Greek debacle, says Mohit Satyanand..

How much are you willing to spend to keep the world's big banks running? My answer is, not one cent. 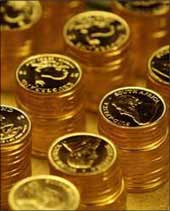 Not that it matters what I think! On May 9, Europe's financial leaders met for 14 hours, and decided they would pledge $1 trillion to the cause of big banking. That's not actually what they said, but I think that's what they meant.

Earlier, the chancellor of the Eurozone's largest economy, Germany, had steadily maintained that she did not think it right that her taxpayers should support Greece through its financial crisis.

She was probably right in stating that the laws of the EU did not allow it. More relevant, she did not think that her people would support it. If she had stuck to her guns, her party might have done better in a German regional election in early May; in the event, however, she suffered a severe political setback.

So why did she change her mind? I guess someone showed her the balance sheets of German banks and she discovered that they owned billions of dollars of Greek bonds.

By the time she began to back an EU rescue package for Greece, prices of bonds of other southern European nations had begun to plummet as well -- especially Portugal, but also Spain and Italy. The risk to the balance sheets of German banks was mounting by the hour.

What was true for German banks was even more true of French banks. Which is why news of the trillion-dollar bailout for Europe had the leading French stock index jump 10 per cent on Monday, 10 May. It also explains why -- with the banks of Europe's two largest economies at risk -- European governments were so quick to jump to the defence of its financial system.

The events of May 9 mirrored what happened several times in the US during the financial crisis in 2008: markets dive towards the end of the week; government types meet over the weekend; and pledge hundreds of billions of dollars in aid.

The underlying issue, though, has not been addressed -- too much debt. Whether it be the US or Greece, Portugal or Ireland, nations that have seen a financial crisis are those that have taken on too much debt.

Debt can be extremely tempting when interest rates are low. But if the debtors use the fresh borrowings imprudently, to support unproductive expenditure, outstandings increase, creditors start getting fidgety, and interest rates go up. This further burdens expenses, which means more borrowings. A truly vicious circle.

When this happens, the borrower's currency also sees huge weakness (which is a necessary part of the correction, as it can lead to greater exports and economic growth).

It is also close to a new high against the dollar. And the pound.

And in rupee terms? At this point in time, the rupee is quite strong. But that is only because capital flows are still buoyant worldwide. In the financial year ending March 31, 2010, India saw capital inflows of $65 billion, which more than compensated for the $53 billion we were short on trade in goods and services.

In 2008, liquidity had reversed, and we saw the rupee plummet to over Rs 51 per dollar. At that time, our trade deficit was much lower. If liquidity reverses again, the drop in the rupee could be a lot sharper.

The probability of this happening is on the rise. I'm telling -- make that forcing -- everyone I know to buy more gold.

The author is an investment advisor.