The real state of Kerala

My grandfather had an elephant. This is the title of a Malayalam novel by Vaikkom Mohammad Basheer. So what? I have three flats. 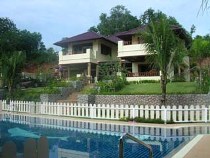 That is the story of transition as far as investments in Kerala are concerned. If till a decade ago, people bought acres of coconut groves, cashew nut groves or rubber plantations, today the shopping list is limited to flats.

Today, this land grows only multi-storeyed flats. Coconuts and other nuts are things of the past - high labour costs and unremunerative prices have ruled these out. Paddy fields are long gone, too. So, investment in land for cultivation is no longer viable. It is real estate that is the new and perhaps the only investment option other than the good old gold that Keralites have always invested in.

So, the Environment Day last week was a nostalgia trip to a greener past. Chief Minister V S Achuthanandan said real estate was the greatest enemy of environment. Since land is scarce, real estate is paying off. But it is for the well to do and non-resident Indians. For the less affluent, getting a piece of land has become impossible.

The state, known for its biodiversity and natural wealth, is fast bidding adieu to all that. The only diversity that is emerging is in the different shades of bright paints used to colour the buildings. Nothing to match the colours of the birds and the blooms that are being replaced. The houses are multiplying at the cost of water availability and energy availability, which climate experts say has huge climatic repercussions.

The chief minister seems to be seized of the dangers of the real estate boom, but there is little the state has done in the past to create other investment and income avenues. On the other hand, it is watching quietly as huge real estate projects, in the garb of information technology and tourism industry schemes, are gobbling hundreds of acres and building up energy and water intensive residential complexes.

Meanwhile, a land-use policy paper is gathering dust in the revenue department. It could have led to legislation to regulate real estate growth in the state. The Paddy and Wetlands Conservation Act, a result of the hard work of this government, is under attack.

There are 20-23 real estate, tourism and industrial projects on paddy fields and wetlands awaiting approval. Activists here say the government is dallying on rejecting these. There is pressure on the government, as these are providing jobs.

The 2001 census found about 700,000 houses in Kerala are unoccupied, which shows the feverish construction activity has nothing to do with a housing shortage. In fact, this is certain to lead to a shortage as land gets overpriced and out of reach of the masses.

State Environment Minister Binoy Viswam happens to hold the housing portfolio and is said to be quite embarrassed by the way real estate, in the guise of housing, tourism and IT industries, is endangering the environment of the state. He maintains a discreet silence on housing as if the portfolio didn't belong to him, say his critics and sympathisers. But the list of real estate projects granted environmental approval by the Centre in the last two years alone speaks volumes about the fate that awaits the state.