Don't go by the names - MIPs may not always provide monthly returns. But you can surely rely on them to deliver steady income 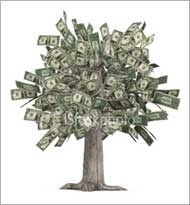 There is no dearth of eye-catching advertisements by mutual fund houses, trying to get you to buy their monthly income plans. Many of us jump into schemes with a mere look at the ads, without doing proper research on whether they meet our requirements or not.

In many instances, investors get misled by the name of the product as is the case with MIPs. While the name would suggest that it will entail monthly returns, it's not necessarily so. Few days back, one of our readers asked us to name some good MIPs that can provide regular returns.

MIP is not an instrument which assures you of a monthly income. On the contrary, it is a debt-oriented MF scheme.

It invests 75-80 per cent-in some cases, more than that-of its corpus in debt instruments and the remaining in equity instruments.

So, while the debt investments ensure a certain amount of stability and consistency, the equity allocation boosts the returns. Though MIPs aim to provide investors with liquidity through regular dividends, they don't assure you of any monthly income. 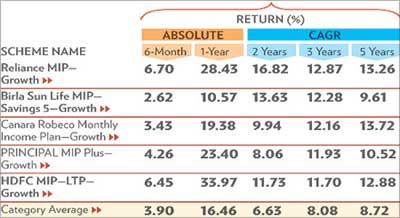 As MIPs are market-linked, the declaration of dividends is subject to availability of distributable surplus, and it's done at the discretion of the fund house. Though MIPs offer a monthly dividend option, many of them don't do so when the market is going through a rough patch.

Like other MF schemes, MIPs also utilise market opportunities. When higher volatility is expected, they take the conservative approach. Currently, as interest rates are volatile, most MIPs have reduced their average maturity from five years to less than two years. Since they hold most of their debt securities till maturity, they can mitigate interest rate risks to a certain extent.

Over the past two years, MIPs have returned 16.87 per cent and 6.8 per cent respectively. Some funds, such as HDFC MIP-LTP and Reliance MIP have given returns as high as 33.94 and 28.42 per cent, respectively.

These are, however, exceptions as MIPs invest a small part of their portfolio in equity (up to 20-25 per cent). This helps them bring steady returns with little capital erosion and limited volatility, as was the case during the 2008 market crash.

A dividend distribution tax (DDT) of 14.16 per cent (12.5 per cent tax, 10 per cent surcharge and 3 per cent education cess) is levied on debt funds. If you sell the units before a year and there is a gain, short-term capital gains tax is applicable.

How it compares with others

MIPs vs Bank FDs. Unlike MIPs, returns on bank fixed deposit (FDs) are assured. Moreover, unlike MIPs, FDs' returns are taxable as per your tax slab. So, the post tax return could be lower than the actual return.

There is no such maximum limit with MIPs. As far as liquidity is concerned, MIPs don't attract any exit load after one year of investment. But, MIS comes with a 2 per cent charge for withdrawal before two years. Unlike MIP, MIS gives you an assured return. It also has premature encashment penalities.

If you're a die-hard conservative investor, and looking for better returns than bank FDs, then MIPs could be a good option. Invest in MIPs if you have a time horizon of more than two years. Don't expect MIPs to provide you monthly returns, but you can surely bank on them for a steady income.