By A K Bhattacharya
March 19, 2010 15:52 IST
While the government stifled PSUs' operational autonomy, competition from the private sector hit their market share, writes A K Bhattacharya.

Divestment of government equity in public sector undertakings began in 1991. The government of P V Narasimha Rao justified the logic of that move by arguing that the efficiency of PSUs would improve once they were listed on the stock exchanges. 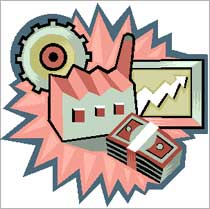 The divestment policy got a big boost under the government of Atal Bihari Vajpayee (1998-2004), when strategic sales of PSUs took place for the first time. These pertained to about a dozen cases of privatisation.

This was a new theoretical construct to justify divestment. Earlier, it used to be argued that the President of India holds the shares of PSUs on behalf of the people of this country. Divestment under the UPA government was thus creating a new class of people who held shares in listed PSUs, in addition to millions of other Indians who owned all the shares of government-held PSUs, albeit indirectly through the President of India!

Yet, it is hard to argue that disinvestment of government equity in PSUs has helped improve their efficiency in every respect. Most companies continue to function under the administrative control of the government and cannot take decisions without keeping in mind the government's political concerns.

For instance, no oil PSU can raise petroleum product prices even though it may incur losses, just because the government has not allowed them to do so.

Indeed, in sectors such as telecommunications and civil aviation, the state of the PSUs has only deteriorated over the years. Take the telecommunications sector first.  The financial condition of Indian Telecom Industries, which was once considered to be a premier telecom equipment manufacturer in the country, has worsened in the last few years requiring capital infusion from the government. Now, the government expects ITI to be restructured in a manner that it ceases to be a drag on government finances.

Mahanagar Telephone Nigam Limited, which used to run telephone services in Delhi and Mumbai, no longer enjoys the kind of market share it used to enjoy even ten years ago.

Bharat Sanchar Nigam Limited is in a worse situation, as its efforts to place orders for new equipment and offload even ten per cent share in the market are being stymied by a variety of forces.

In the civil aviation sector also, the financial condition of the National Aviation Company of India Limited has deteriorated over the years. Even the merger of the erstwhile Air India and Indian Airlines into a single entity, NACIL, has not helped.

It is true that the PSUs in both the telecommunications and civil aviation sectors have suffered also because of stiff competition they had to face from the private sector. While their operational autonomy was stifled by the government (and divestment was of little help), their private sector competitors managed to increase their market share and improve financial performance.

If PSUs are still doing well, it is largely in areas where there is not much of a competition from the private sector. The financial sector is perhaps the only exception. PSU banks have done remarkably well even though they have been constrained by government ownership and have faced competition from private sector banks admirably so far.

The problem is the government has used PSUs as a milching cow in the last two decades, without taking adequate steps to bring about effective changes in the manner in which they function.

Divestment was thought of as a solution but its manner of execution failed to achieve the objectives of imparting operational autonomy to them. Over and above that, the government began cutting its financial allocations for the PSUs.

In 1991-92, PSUs (excluding railways) were expected to raise as much as 78 per cent of their total outlay through internal resources and bonds. This year, that ratio has gone up to 91 per cent. That alone should tell you a lot about the government's approach to PSUs in the last two decades.