Indian households database Consumer Pyramids answers why two years of high inflation did not matter to the consumers of the country, writes Mahesh Vyas.

Inflation has been high for a fairly long period of nearly two years. First, the wholesale price index had shot up in 2008-09 because of an increase in commodity prices. And then, in 2009-10, the consumer price index rose as food prices soared following an agricultural drought that curtailed domestic supplies. 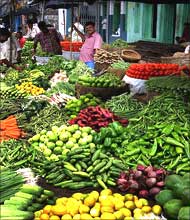 Surprisingly, public uproar against this sustained increase in prices has been remarkably muted. Opposition political parties have not been able to exploit the situation. And, the Congress party could face the polls with impunity in May 2009.

Part of the reason for this lack of bite in the rise in inflation is that it is not hurting the proverbial common man. The rise in the wholesale prices in 2008-09 did not percolate to consumer prices because of the government controls, and partly because of competition among producers.

The government controls over prices of petroleum products that are directly consumed by the common man, such as kerosene, petrol, LPG and diesel, ensured that s/he did not suffer the consequences of crude prices remaining above $100 a barrel for a large part of 2008-09. The increase in prices of other commodities was largely absorbed by companies. This led to a fall in their profit margins in that year.

In 2009-10, consumer price inflation has been high for a long time. It peaked at 16.2 per cent in January 2010 and averaged 11.8 per cent during the first 11 months of the year. But, there is no angst in the political leadership. Possibly because it faces no wrath of the electorate. But, why is there no ire among the masses?

Interestingly, the only ones who are perturbed by the rise in inflation are the economists and the financial market analysts. Both are essentially interested in telling the Reserve Bank of India what it should do under the current circumstances.

The shift in the objective of controlling inflation - from protecting consumers against price increases to creating the environment necessary for a stable financial market - is an example of the extraordinary dominance of the financial markets in modern life. But, this is not the focus of my discussion.

My interest is in the consumer markets of India. The question I pose is: Why did two years of high inflation not matter to the consumers of India. And, I seek to answer this question with the help of "Consumer Pyramids", the latest and the largest database on Indian households.

The remaining 20 per cent households (the bottom of the pyramid) could not meet their expenses from their incomes during the year. They had an income of Rs 3,000, or less than that, a month. At the very bottom of the pyramid are those who earn Rs 2,000 or less per month. They were the worst hit. But, they account for a mere 10 per cent of all households. At the fringe of the society, they are too few and, therefore, their voices are too feeble to impact an electoral result.

The voice of the lower middle class (those who earn between Rs 3,000 and Rs 8,000 per month) is lot more effective in a democracy like India. Because, it accounts for a whopping 43 per cent of the households. But, this group has a savings rate of 20 per cent.

It has the ability to absorb higher prices. And, growth in employment opportunities is more important to this group than the rise in inflation. This is also true for the next group - the middle class that earns between Rs 8,000 and Rs 15,000 per month. They account for another 20 per cent of the households.

The relentless rise in investments in recent years has created new jobs all over the country. The gradual withering of the belligerent politics of the NDA has been replaced with hopes of better employment for a large section of the middle-class households. Inflation is a small price to pay for this metamorphosis.

The relation between economic hardships caused by inflation and political choice is obviously not binary. Inflation levels beyond a point will hurt the consumption choices of even those who save, and this will show up in political discontent. For this, inflation in the CPI has to touch 20 per cent like it did in late 1998.

Further, the bottom of the pyramid is not totally irrelevant in a democracy. We have heard of swings that can impact electoral outcomes dramatically. In 2009-10, inflation and the distribution of the consumer's wallet were so aligned that a substitution could offset a small part of the attention-grabbing inflation of some commodities.

Prices of potatoes and onions rose by nearly 50 per cent in 2009-10, while those of vegetables and fruit increased by a much lesser 10 per cent.

In the first six months of 2009-10, according to Consumer Pyramids, the share of potatoes and onions increased to 11.5 per cent but that of vegetables and fruit shot up to 24 per cent. Prima facie, this looks like some substitution effect at work in the poorest strata of society. The substitution made sense in terms of the economic value as well as nutrition.

The increase in sugar prices seems to have hurt the poor. Sugar seems to be an energy shot that the poor cannot do without. As prices increased 50 per cent during 2009-10, it took away 8 per cent of the income of the BoP-II in the first half of 2009-10 compared to just 4 per cent in 2008-09 as a whole.