How '3 Idiots' became a top brand 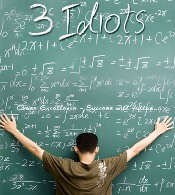 The 2009 Brand Derby, threw up some interesting issues. A film, 3 Idiots, topped the chart.

The Derby ranks brands that were launched in 2009 based on the perceptions of marketers. In the 2008 Derby, Ghajini had come eighth; Lage Raho Munnabhai had topped the 2006 Derby. So, films have not just shown up but done well also in the Derby.

Is a film a brand? The answer will depend on how one defines a brand. The title is how a film is known; so it has to be a brand. When that name is taken, the consumer knows what product is being talked about.

It thus fulfils the job description of a brand. Does the title of a film lend itself to extension to other products? Of course, it does. There is merchandise from popular films available in the West, though not so much in India. Can films be serialised? The answer is yes again. Godfather, Spiderman, Mission Impossible...the list is long.

So, 3 Idiots, which happens to be the biggest grosser of all times in Bollywood, is indisputably a brand. But experts are not sure if it can be serialised. They feel that the story, which was a take on education by rote, gets closed at the end of the film. It will not be easy for the film's producers to revisit the subject.

And it was the appeal of the subject which had caused the film to become so popular. Most of us have had to cram into our heads unintelligible stuff because we were told to do so. You take the theme out, and there's nothing left. Some others feel that the producers can get the three friends together again to deal with some other issue. In that case, there could well be a 3 Idiots Part II.

What about 3 Idiots merchandise? Difficult, say experts, because the protagonists were ordinary fellows who did ordinary stuff on screen. They weren't superheroes around whom games can be built. But one will have to scan the countryside to know if the brand is being used without the knowledge of its title owners.

In the past, for instance, a country liquor brand called Crorepati was found in the marketplace in Uttar Pradesh after Kaun Banega Crorepati became such a hit on television.

The second interesting facet of the Derby was that all the brands that did well were launched in categories where there is a great deal of clutter. Of the 32 brands that were ranked, as many as nine were telecom brands, seven were food brands and six were automobile brands.

Adversity seems to have brought out the best in brand builders. It is worth noting that 2009 was also a year when ad budgets were put on a tight leash by most companies.

There was pressure on brand managers, creative agencies and media buyers to make every rupee do a little more. Also it was in 2009 that companies began to listen to their consumers in blogosphere. A fair bit of troubleshooting now happens there. And the results are there for all to see.

The moral of the story is that just differentiation in product is not good enough; it needs to be amplified in the mind of the consumer. This is where the challenge lies for the creative inputs. Indeed, most agencies carry out a lot more consumer research than before.

There is less of gut feel and brainwave now. Some years ago, a North-based maker of packaged food (dal, curries etc.) had targeted its product at newlyweds with the tagline "Make love, not dinner".

It was perhaps a little too bold for its time. Research would have shown the company that the tagline was a smart joke which took the attention away from the brand. The aggressive positioning meant the brand could never be a family affair with kids around.

The third interesting facet of the Derby was that there were 13 all-Indian brands in the list of 32. And these can be found across categories like automobile, media and entertainment, food and telecom.

In the top five, there are two Indian brands: 3 idiots and Bajaj Auto's Pulsar 135 LS. In the top ten, there are two more: HCL Me Notebook and Rakhi Ka Swayamvar (a reality show built around Rakhi Sawant on NDTV Imagine).

In the 2008 Derby, the top two brands were Indian: The Nano and the Indian Premier League. This is a good sign. Finally, it seems, Indian companies have learnt how to build strong brands. Till recently, it was accepted that this was one area where Indians had no expertise. The perception seems to be changing.

The final fact that stood out was that brands from sectors like real estate and financial services failed to make it to the Derby. This is disconcerting. Both the sectors spend large sums of money on advertising.

Yet their brands do not resonate in the market. Experts say that financial services run the disadvantage of dealing with brands that do not have a form, shape or image. Real estate, on the other hand, breeds only local brands. To get counted, they need to work on national brands.