Now, walk the talk on cities! 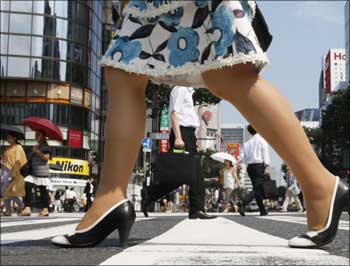 There is now one more way, on top of all the old ones, to judge a city: is it a walker's city or not? In India's mostly unplanned cities, the last thought in the minds of those who order things is the need to make way for uncluttered pavements or sidewalks.

The little that used to be there has mostly given way to the need to widen roads to unchoke the traffic on them. And when even that has not worked, flyovers have come as monuments to ignorance (they also don't work) and wastefulness.

Since most cities don't deliver, the consolation prize that many seek is to be in a neighbourhood which has a decent park or two or move to a new development which has walkers or joggers tracks designed into them.

Those who are unlucky enough to miss out on both seek out stretches of a decent road or two near their homes for a brisk morning's pace-out. They are satisfied with very little since it is foolish to ask for more. A stretch that is not filthy makes do and should it have some green then that is a bonus.

In the soft light of early morning, these stretches take on a different personality. Brisk walkers in groups, twos or even singles, who often know each other well, cheerfully greet each other and pass on.

In under two hours these stretches lose their distinctiveness, get their quota of traffic, noise and fumes and their charmed profile goes into hiding, until it is daybreak again. It is like a girl in a fairytale, blessed or cursed -- depending on how you look at it -- that she will look charming and fresh for two hours every morning!

I have been unusually lucky all my life. I grew up within walking distance of Kolkata's Victoria Memorial with its well laid-out park, though in early life I seldom got up early enough to do justice to the locational privilege that my grandfather had bestowed upon his progeny when he built his house in the thirties.

Then came residence in a gated community in Gurgaon where the road around it was exactly a kilometer long. So not only could you take a pleasant walk any time of the day, even keeping track of how much you had done was made easy.

Then I came to Bangalore where parks are the only bit of garden that remains of the former garden city.

But my luck seems to have run out on the last leg of my journey. Every time I tell someone where our flat is in Kolkata, the invariable reply is: that's good, the Bypass or nearabouts is the place to be. But there is not a park in sight.

So, I have through trial and error discovered that consolation stretch which, by the wave of a magic wand every morning, becomes pleasant with pleasant walkers exchanging pleasant greetings.

The vast majority of us in urban India who do not have a decent place to walk, should start a campaign to rescue whatever decent stretch of road or open space there is in the neighbourhood, adopt it, nurture it, and not allow it to be ruined so that at least for two hours in a day, when the sunlight is all soft and virginal, the mundane becomes charmed.

The next citizens' initiative has to be to convert prominent shopping areas in our cities into walking zones where cars are not allowed. Of course, there will be opposition from shop owners who will fear losing business as those unable to drive up will drive away.

But, as has happened all over the world, the experience in shopping promenades sans cars has been so superior that custom has grown, not declined. What you will need is car parks nearby where cars can be deposited and then the window shopping or shopping proper done on foot.

For this the local government has to oblige and that is where the citizens' campaign will have to turn serious.

The third and more challenging initiative has to be to free up existing walkways from usurpers, both spillovers of established shops and hawkers.

While the shops have the money power to 'influence' civic staff so that they turn a blind eye to the encroachment, the hawkers fight literally with their backs to the wall as it is their livelihood which is at stake.

An elaborate social contract will have to be worked out whereby hawkers and walkers can share pavements.

Then finally redesigned cities will have to come where most people will be able to live within walking distance of their work place. This will not happen in a day. If the movement gets going now, then it is the next generation that will thank us.

These notions are not top of the mind in India today, but in good parts of the world, everyone has bought into them.

Long court battles will have to be fought with land sharks to rescue parks. It is the citizens who have breathed new life into cities like Chicago and Barcelona. Why can't a couple of Indian cities take the lead on the subcontinent?

Kolkata make it a double whammy over Hyderabad