News
Business
Movies
Sports
Cricket
Get Ahead
Money Tips
Shopping
Sign in  |  Create a Rediffmail account
Rediff.com  » Business » Bhopal & BP: How they don't deal with it

Bhopal & BP: How they don't deal with it

T N Ninan writes on how the United States is handling the BP oil spill disaster and what India needed to do in the horrific Bhopal gas tragedy. 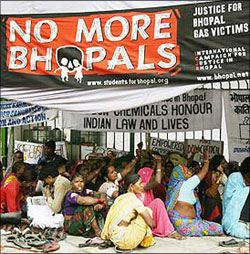 Tony Hayward, chief executive of BP, flew into Washington earlier this week to face a grilling from members of the US Senate. As he stepped out of his limousine to enter the Capitol building, agents from the Federal Bureau of Investigation (FBI) swooped down and arrested him on the charge of "culpable homicide reducible to criminal negligence".

BP, after all, had ignored several safety warnings about its drilling operations and cost-cutting decisions, before an explosion sank its rig, Deepwater Horizon, killing 11 people and sending millions of gallons of oil towards nesting pelicans on the US coast.

The FBI spirited Mr Hayward away to a safe house. After waiting for over half an hour for Mr Hayward to make his appearance, the chairman of the Senate committee made enquiries about Mr Hayward's whereabouts.

On learning what had happened, he got in touch with the White House, demanding that Mr Hayward be released so that he could face legislators. Mr Obama had already agreed to meet Mr Hayward and the chairman of BP, Carl-Henric Svanberg, so his chief of staff phoned the FBI director to plead executive privilege and got Mr Hayward released.

Mr Hayward was then taken in an FBI car, accompanied by senior FBI officers, and released at the steps of the Capitol building. Reporters were surprised to see Mr Hayward back at the scene of arrest so quickly, and to all appearances a free man.

The frontline FBI agent who had arrested Mr Hayward told TV reporters that he did not know why the BP CEO had been released; he had got a phone call from his superiors, who ordered him to release the prisoner. The driver of the car told reporters that he didn't know who his passenger was until the last minute.

When Messrs Hayward and Svanberg met the president at the White House, the Republican minority leader in the House of Representatives charged that this showed government complicity in a cover-up.

Mr Svanberg did not help matters when he referred to victims of the oil spill as "small people". He later apologised, but Washington's leading newspaper said the comment reflected the arrogance of large, multinational corporations.

Meanwhile, Mr Obama was asking BP to suspend all dividend payments to shareholders until it paid for the damage caused by the oil spill. BP maintained that while it sympathised deeply with the pelicans which had suffered on account of the oil spill, the accident had occurred in international waters and the company was only bound by international law.

Also it would have to review further drilling in US oil fields -- a threat that promptly brought the Republicans out in support of the company, shouting "Drill, baby, drill!"

There was speculation on New Deal Television (NDTV) that BP's tough stance was the result of support from the British prime minister, who was concerned that suspending BP's dividend payments would affect the incomes of millions of shareholders in Britain, and trigger the world's first triple-dip recession.

Another channel, TV1776, aired the suspicion that diplomatic pressure from the former colonial ruler of the US would force Mr Obama to back off.

Meanwhile, the Senate decided to set up America's first EGOS (Empowered Group of Senators) to review the oil spill liability cap of $75 million. Mr Obama, meanwhile, was demanding $20 billion from BP. At the time of writing, BP was planning to go to the US Supreme Court, where a certain judge... .

Fact: The BP CEO appeared before the Senate, there was no arrest; the CEO and the BP chairman met Mr Obama, who has got his $20 billion -- though he had no legal power to demand it. (As Deep Throat might have said immediately after Bhopal: Follow the money, not Anderson.)

Interest rates may go up by 25 bps: SBI