Many cooks make the broth cost-effective 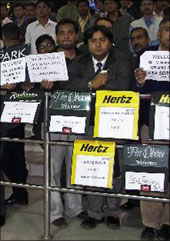 A week in small town Europe with lousy service (by my spoilt Indian standards) and lots of avoidable Do-It-Yourself clarified my understanding of our service economy.

It was further sharpened by a conversation I had with a receptionist at a hotel in a town with 150,000 population. When I explained to him that we were undertaking a census, his mind boggled and he said that we probably needed to use half of India to count the other half!

Actually something like that seems to be happening. In my building in Mumbai, the census person came and told the manager of the building society to distribute the questionnaire to all of us and to make sure that someone was at home on a particular day, all ready with the answers.

He, in turn, told the watchman who informed each flat via its domestic staff and then via a circular from the society that was distributed by another watchman. So, for 16 flats with probably 100 people living in them, there were 20 people involved in the exercise.

Did it need that many people? Well, everyone except the census people was doing it part-time, each spending a tiny amount of time on the job. It didn't really add up to that many man-hours. Was it more expensive than if it involved just one or two persons?

Not to the Census Bureau because they only paid for their person, while the rest of the activity costs were effectively shared by all of us who pay for the watchmen, the manager and our domestic staff.

A cumbersome process? Not really, because it was a well-oiled process and the job was done smoothly.

Similarly, the structure of our service economy is a lot of people doing a little bit each of the service task to be accomplished. It is a cost-optimised model that works for us and spreads the earnings around.

We need to stop thinking that progress or the holy grail of modernity is to find ways to do tasks that eliminate people, or to have fewer people doing more things.

And why? Why keep customers waiting at cash counters in shops because the cashier has to fold the clothes and put away the hangers while the queue becomes long or to have secretaries walk down to the canteen to get you the coffee (that's expensive use of skilled labour for unskilled jobs) or have the hotel receptionist keep you on hold forever because he has to talk to someone through getting connected to the Internet, etc. Is it so that costs are kept low, customers are dissatisfied and a small number of people make more money?

But, of course, disguised unemployment is wasteful and a no-no. But first we need to think about what this actually is. The chap who stands in front of the toll booth to take the cash from the driver and give it to the man in the booth and vice versa shouldn't be there. He doesn't add any value.

But if 10 of them can run down the long line of cars and collect the toll from the cars at the back of the long queues so that they can just sail through the toll gate, then they do add to system efficiency.

At some airports, there is this established practice where people hold the name board and wait for you, while the driver of the car does something else with the time saved -- probably has tea or catches a nap. Is that extra person adding value? Of course, he is because he is taking some of the pressure off the overworked driver who can then work some more after a brief rest.

The driver presumable pays this person something because he finds the service valuable. This is the service economy, not wasteful or inefficient ways of doing things.

The idea that more people performing a task is wasteful flab needs to be re-examined. Market forces always work and we have an intensely competitive service economy. Therefore, it probably is a more efficient, finely calibrated work grade pricing model.