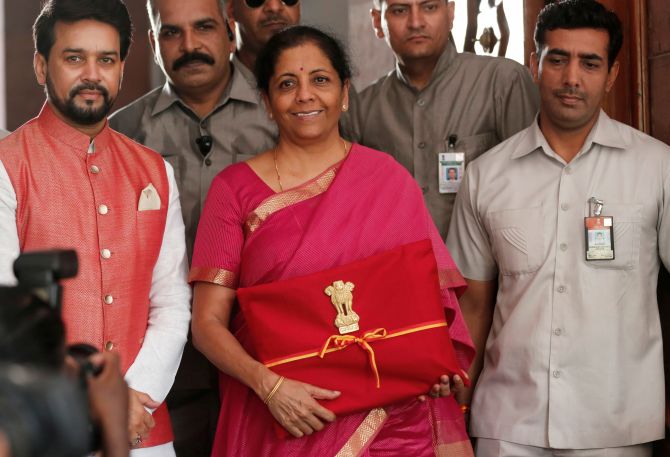 Photo: Courtesy, Adnan Abidi/Reuters
Finance Minister Nirmala Sitharaman will present the Union Budget for the year 2022-23 in Parliament today at 11 am.
The Budget session of Parliament began on Monday with the address by President Ram Nath Kovind to both Houses in the Central Hall.
The finance minister tabled this year's Economic Survey, which was centred around the theme of 'Agile approach'.
"The session is scheduled to conclude on April 8 wherein the first part of the session will extend up to February 11," said the Lok Sabha Secretariat on Sunday.
"There will be a break from February 12 to March 13 during which the standing committees will examine demands-for-grants of ministries/departments and prepare reports thereon. In all, there will be 29 sittings; 10 in the first part and 19 in the second part," the Lok Sabha Secretariat's press release stated.
From February 2 to February 11, the House is scheduled to sit from 4 pm to 9 pm.
Thus, five hours have been scheduled per sitting during the first part of the Budget Session. There will be no Zero Hour and Question Hour in both Houses of Parliament during the first two days of the Budget Session.
« Back to LIVE

Rohit is a bit laid back: Ganguly

Ganguly was impressed by Rohit, who has won a record five Indian Premier League (IPL) titles for Mumbai Indians, and said he should be given a longer rope before being compared with the likes of the great MS Dhoni and Kohli.

The Delhi high court Wednesday told Ramdev that while he was welcome to have his followers, he should not mislead the public by saying more than what is 'official'.

'Never tried to be someone I am not'

India's demand for petroleum products like petrol and diesel will grow by 7.73 per cent in 2022, the fastest pace in the world, an OPEC report said. India's demand for oil products is projected to rise from 4.77 million barrels per day...