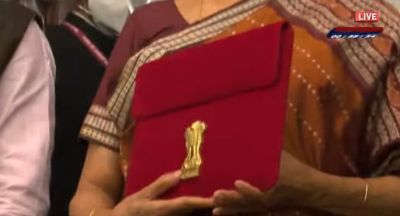 Finance Minister Nirmala Sitharaman on Tuesday again took a digital tablet wrapped in a traditional bahi-khata style pouch as she headed for Parliament to present the Union Budget 2022-23 in a paperless format just like the last year.
She posed for the traditional 'briefcase' picture outside her office along with her team of officials before heading to meet the President.
he, however, was holding a tablet instead of a briefcase to present the Budget in a digital format.
"#AatmanirbharBharatKaBudget | From 'Bahi Khata' to Made in India' Tablet Finance Minister @nsitharaman carrying the Budget in the #paperless format in a tablet kept inside a red cover with National Emblem embossed on it instead of the briefcase or 'Bahi Khata'," Digital India tweeted.
With the tablet carefully kept inside a red coloured cover with a golden coloured national emblem embossed on it instead of the briefcase, she went straight to Parliament after meeting the President at Rashtrapati Bhawan.
Sitharaman, India's first full-time woman finance minister, had in July 2019 ditched the colonial legacy of a Budget briefcase for the traditional Bahi-Khata to carry Union Budget Papers.
She used the same in the following year, and in a pandemic-hit 2021, she swapped traditional papers with a digital tablet for carrying her speech as well as other Budget documents.
Her Budget for the fiscal year beginning April 2022 (FY2022-23) is the Modi government's 10th straight Budget since 2014 (including one interim Budget presented ahead of general elections in 2019).
« Back to LIVE

Ernakulam district authorities on Tuesday said 350 cumecs of the water from Idamalayar, which reached Periyar river but there was no considerable rise in the water-level.

In Pictures - Chess Olympiad draws to a close

Besides the four ministerial berths, the Congress has also sought the post of Speaker of the state assembly, but Kumar is not keen on giving that, sources said.

Having observed variations in capital gains tax computation, the revenue department is working on a mechanism to analyse futures and options (F&O) trade data and pre-initial public offering (IPO) transactions. "The directorate of I-T...