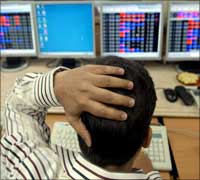 So far, we have concentrated on only price chart patterns and formations, which appear in the top half of a chart. Today, we will look at oscillators, which are represented in the bottom half of the charts.

I know the mere mention of this name, Oscillator, may have turned off quite a few readers who may not have fared well in school physics. Don't worry. We are not going to manually calculate values. Any technical software you use will do that for you in a jiffy. You will only be required to visually appreciate the fact on where the oscillator (represented in the form of a rising, flat or falling line) is headed.

The nearest example of an oscillator is the pendulum of a clock. The pendulum swings or oscillates from left to right and then again from right to left. While in a clock, a given length of pendulum at a given gravity will always take the same time, it is not so with stocks. Stocks may oscillate from being in an over-bought condition to being in an over-sold condition. But the movement from being overbought to oversold does not happen at the same speed in every cycle. And stocks may continue to be in a state of being overbought for a long period of time.

WHAT PURPOSE DO OSCILLATORS SERVE?

Most of the time, by merely looking at the price charts, it is possible to form a view as to which way the wind is blowing for the stock. But some of the time, when price charts are confused, oscillators show you the way. They act as a lighthouse and you don't have to grope in the dark.

This indicator fluctuates between two extreme conditions, called overbought and oversold, and hence the name oscillators. The reason for understanding overbought and oversold status for any underlying movement is to get proper entry and exit points. For, after reaching in to an overbought or oversold zone, the price often reverses the trend or goes into a consolidation phase.

There are many types of oscillators, namely MACD, RSI, etc. For the limited use of this article, we look at Relative Strength Index (RSI). It's an extremely useful and popular momentum oscillator.

The RSI compares the magnitude of a stock's recent gains to the magnitude of its recent losses and turns that information into a number that ranges from 0 to 100. It takes a single parameter, the number of time periods to use in the calculation.

A 14-day RSI is a highly used parameter. However, some technical analysts also use 9-day or 21-day parameters as per their preference. This is shown as a line chart below the price chart.

HOW TO READ THE RSI OSCILLATOR

However, if a buy signal is being generated by both the price charts and the RSI charts, it improves the success possibilities.

Note that after the sell signal emerged on both the weekly price charts and in the RSI chart, the stock fell from 560 on January 4, 2008, to 206 on July 4, 2008. Anyone who may have followed the chart could have made good money by going short. Similarly, as the stock emerged from the oversold zone on July 4 2008, investors and traders could have gone long to reap good returns now.

The oscillators can be used with equal conviction in daily, weekly or intraday charts. So, don't hesitate in terms of using this tool even in one-minute intraday charts.