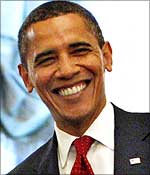 APEC is an important forum that brings together the dynamic economies of the Pacific Rim and Singapore is an important partner on a range of regional and global issues, Gibbs said.

"President Obama looks forward to working with APEC leaders to promote open trade and investment, support economic recovery and sustainable development, and address key challenges facing the region and the world," he said.

Gibbs said Obama expects to visit other countries during his trip to the region, but did not give the names. "Further announcements will be forthcoming when those plans are finalised," he said.