Is the stock market a gambling arena? 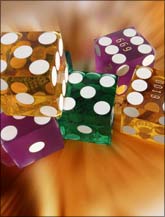 Many people shy away from the stock market thinking it is a lot like gambling and some even think it is gambling. The vagaries of the stock market in the form of sudden spurts and dizzying falls only add fuel to this thought.

Adding fuel to the aversion is the past pain from few experiments -- many in their 40s are still not entering the market because they were hurt by the Harshad Mehta scandal!

The goals for any investor in the stock market change very dramatically based on whether he is a short-term player or a long-term one. In the short term, the market has to be perform the role of an income generator for the trader/investor. In the long term, it has to give capital appreciation for the investor.

The first thing to remember is that when we buy a stock (a share in any company), we get a part ownership in the company. We have a right to a part of the assets and a part of the profits that the company generates.

Shares are best for the long-term investor

To generate income out of shares is possible in two ways:

Wait for the dividend. This income is going to be quite low compared to the market price of the share. Typical Indian dividend yield (dividend per share/market price of share) is in the range of 1% to 2%. Not quite attractive.

The other way is to generate trading gains. This is highly risk laden as inherently share prices follow randomness. The Random Walk Theory says that the events in the past do not affect the price of the shares in the future. Hence, it is not possible to predict the future price of shares. This means that to generate income by trading one has to speculate. That is gambling.

In the long run (three years and above), however, the scenario is different. There is sufficient control for the management of the company to steer it to success or failure. And this will be reflected in the stock market as rise or fall in the share prices.

As an investor in the company, we too get signs on whether to hold on to the share or to let it go. In the short run companies can fool its investors by changing some numbers and by making good presentations but in the long run to compete and to grow, they have to deliver value.

Returns in the long run

The stock market remains the undisputed and consistent leader for returns in the long run. In spite of the economy slowing down in India and going into a depression in many parts of the world, the historical Sensex returns are still very attractive.

The Sensex was formed as an index to reflect the stock market movements in the year 1979. The value at that time started at 100. On August 14, 2009 this figure stood at 15,400. This translates to a compounded annual growth rate of an amazing but true 18.28%.

We cannot see any other asset class giving such returns over the long term. Is there a reason why stocks perform so well in the long run? Yes, there are.

As business people, the promoters of the companies have an inherent reason for working towards the growth of their companies.  Also businesses need time to grow and flourish.

As businesses compete with each other during their growth, they come out with creative, efficient and effective solutions to our needs and problems. This creates value for us as consumers and as investors. The country itself grows because of this.

A case in proof is a Bangalore family that was surprised by the value of shares that their late father had accumulated. He had bought shares of Hindustan Level Limited (HLL -- now Hindustan Unilever Ltd) consistently for over 20 years from whatever savings he could scrap from his earnings as an executive in a private company.

At one point in time HLL was the largest company in India and he loved the company. Post his retirement he continued to hold the shares in the material form itself. After he passed away, the family found that he had over Rs 1 crore (Rs 10 million) worth of HLL shares!

Stock market is not a gambling arena

The stock market is a tool for investing and wealth-creation. As discussed above it is a way to create wealth in the long term. It should not be mixed with gambling nor should it be used for that purpose.

Like gambling, it might be thrilling in the short term but too much indulgence in thrill at the expense of strong fundamentals could lead to major losses.

Ironically, the media and the people around us always highlight the extremities rather than focus on the fundamentals. For example, a person losing Rs 500,000 in one day is given more importance than someone earning the same amount in three years. This has been the major cause of creating a negative picture of the stock markets.

We need to come out this imagery and look at the broader and long-term picture. Long-term investors can never lose money in the stock market if the fundamentals are right!