Home loans: One teases, the other eases

Teaser and step-up home loans may look similar in the beginning, but they work out differently in the later years, says Arnav Pandya. 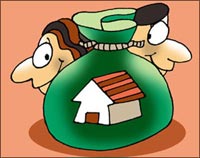 There have been a lot of changes in the Indian loan market. As the slowdown impact fades away, banks and financial institutions are once again battling to attract the attention of potential borrowers. This has led to low-rate loans becoming increasingly popular.

On one hand all big lenders have introduced loans that are fixed for first few years and then align to market rates. At the same time, there is a product that offers payment convenience to borrowers. It is called step-up loans, this product allows customer to pay smaller equated monthly instalments (EMIs) initially and higher in the later years.

As the name suggests, these are loans that look attractive at first glance as the interest rate for the first two-three years are fixed as well as low. But there is an apprehension that it may hurt the borrower when the interest rates align to the market. These are linked to the prime lending rate or the benchmark rate of a bank.

For instance, a 15-year home loan that has 8 per cent rate of interest for the first year and 8.5 per cent for the next two years. Beyond that the rates will be reset to 1 per cent below the prime lending rate (PLR) of the bank.

This product involves a situation where the loan is structured in such a way that the EMI is low for the initial period and then will rise.

The loan is structured for people who have the potential to earn more as they progress in their jobs.  It works on the presumption that the higher EMI can be afforded at a later stage.

At first sight, both these loans might look similar but scratch the surface and the differences emerge. In a teaser loan, there is no surety that the loan interest rate and the EMI will rise, depending on the markets. If the overall interest rates continue to remain low, the EMI will not change drastically.

But if the initial rate is very low, then such a situation is unlikely and the rate could rise. For example - If the rate of interest offered on a teaser loan is initially 7 per cent when the prevailing rate is 11 per cent, then there is a very high chance that the rate on conversion will be higher.

A step-up EMI loan, however, is guaranteed to raise the amount that the individual has to pay after the initial time period is over, so there is unlikely to be any unpleasant surprise on the downside, because the benefit is already taken by the low initial monthly payment.

It is also very difficult to plan for a teaser loan, as no one can correctly predict the interest rate movement. Also, higher the time period for which the initial rates are fixed, the greater the uncertainty. On the other hand, when it comes to a step-up EMI loan, adequate planning is possible.

A step-up EMI loan should be considered only when there is going to be a certain rise in the income of the individual that will enable future payments. A step-up EMI loan is usually suitable when a person is in the initial stage of working life.

When it comes to a teaser loan, the working of the actual rate to be charged after the initial low-rate period is over, is important. A lower spread, as in two per cent below PLR than 1 per cent below PLR, helps.

There can also be a choice of this loan when the rate for the first few years is either very low as compared to the prevailing rate or that there is a long period for which the loan will be kept at a lower rate when the prevailing market conditions are in the high interest zone.

The writer is a certified financial planner.