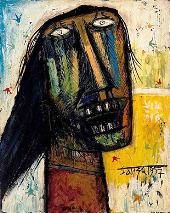 2009 was a nether year for India's barely-emerging art industry, but it's already correcting course. Catch the big hits and misses in this A-Z.

Art funds got a bad name this year, not just because the promise of astronomical sums evaporated like a mirage, but because payback time seemed as flawed as the many fakes and forgeries that riddled the market and diddled buyers.

Bodhi Art, gallerist Amit Judge's ambitious outing, collapsed spectacularly this year, shutting down galleries across the West and in India.

In hindsight, most see it as a flawed model of a gallery that grew too fast, with too many emerging and contemporary artists being given shows that out-priced them from the gallery circuit. But while it lasted, it brought in a specialisation rarely seen in the art world before.

I'm ambiguous about artist Chitra Ganesh. Is comic-strip drawing likely to morph into high art with longevity, or is it doomed to be a short-term fad? I like it...but I sure as hell wouldn't invest in it.

The Dodiyas, both Atul and Anju, have had a bad year from too much art, too highly priced, earning sniggers in the market, but the talent is still there. Watch out for their next moves.

F N Souza surprised many with the prices he got in the recent Saffronart auction -- or not. India's artist with the most chutzpah is like a property with a view -- never out of fashion.

India's face of contemporary art, especially in the West, continued to remain Gupta, Subodh. You can criticise the cliché his utensils have become, but the artist has proved that he's more than capable of outlasting the meltdown as well as the potentially embarrassing situation where collectors are demanding to know what to make of his fallen prices when they paid substantially more at a hype-inflated peak.

In or out of India, Husain, M F continues to make news and court controversy. Whether or not he makes it to the India Art Summit, collectors were still willing to pay top-rupee for the works of India's most consistently selling artist.

The India Art Summit revived the fortunes of a sluggish art industry that was in danger of slipping into coma. There were no edgy works, no mega deals, yet its success caught galleries unaware, and they hastily put together shows to get collectors back to doing what they do best: spend on art.

At one point Jagannath Panda was the artist with the mostest, selling so fast, the paint dried on the canvas only after it had left his studio. He was criticised for repeating himself, but his re-invention this year is, umm, let's say less than inspired. But is it a new beginning?

India's great export, London's Kapoor, Anish, alas, has never shown in India. But this year, at the India Art Summit, we caught a glimpse of two of his show-stoppers, one of which at least sold for a reported Rs 1 crore (Rs 10 million).

But no, don't go expecting a big Kapoor show in India any time soon -- any reports that Shiela Dikshit has done a secret deal for a city installation in time for the Commonwealth Games are without foundation.

India claimed some of its lost space in both the antiquities market, as well as in miniatures and other art forms, which had been drowned out in the recent past by a more vibrant contemporary market. It's now time to reclaim both pride and prices in that genre.

As many had predicted, prices for Manjit Bawa peaked, while Manish Pushkale, grown too big, too soon, had his comeuppance. Manjunath Kamath, meanwhile, is someone you need to look out for.

Neville Tuli might have averted catastrophe when a consignment meant for auction at the Taj Mahal Hotel escaped the 26/11 inferno, but this year has proved less lucky.

While his Osian's continued its expansion across lines with great ideas, 2009 has proved controversial with reports of a massive fiscal crunch, unpaid debts and a teetering hold on its premier space in the art world. For the record, Neville Tuli dismisses these as rumours, but the market isn't convinced.

After the peak of 2008, prices plummeted in 2009 -- the moderns are back to 2007 prices, the contemporaries are still sunk, but recovering, even though it's going to be a long haul before course correction sets in. Most people say it's a good thing.

This is hardly news any more, but the queues of art investors as a breed vanished overnight. They are now an endangered species. I say: good riddance.

This is the last year Raza, S H spent in France -- he hopes to shift back to India now -- and the artist continues to remain a favourite with collectors. But watch out also for Rashid Rana with his explosive talent.

Sculpture had its outing with two major shows -- K S Radhakrishnan's in Delhi where most loved and some said they were tired of his teeming world of figures, and Paresh Maity's in Mumbai where the artist surprised many of us with motorcycle parts as his medium.

Sunil Gawde has big ideas too, though the space he occupies must belong, legitimately, to installations, not sculpture.

The almost-blind but hugely talented Tyeb Mehta passed away. No one else has painted as sparely but with as much emotion as this great master, whose prices, and few canvases, are fated to be blockbusters.

Upadhyay, Chintan refuses to go away. His unsettling 'babies' stay with you long after you've seen them at a show.

Vaikuntam, T might be what every socialite wants as a 'safe' work, but this year the Hyderabad-based artist redeemed himself by painting much larger than before. Prices moved up commensurately.

Waswo X Waswo exists. Watch the space where he travels in 2010.

There was no X-factor on view this year -- blame it on the shock of the crashing market -- which meant that too many shows, too many galleries, left you yearning for better work, while you yawned at what you saw and went Zzzz!