How to make money in volatile markets 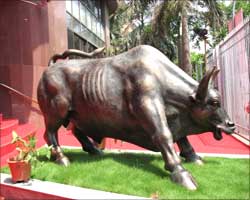 Unfortunately, few stocks possess both attributes. Stocks that outperform the market on the upside tend to fall most rapidly in a general decline, while those that lag behind an advance tend to suffer less in a collapse.

Just as price trends seem to persist under certain conditions, the tendency of a specific stock or group of stocks to exhibit above average volatility also persists over time.

But while all price trends ultimately come to an end, the volatility characteristics of most stocks persist for years or even decades. Hence volatility can, in and of itself, be an especially useful stock selection criterion.

When the market is expected to rise, diversified portfolios of stocks, -- and, equally, diversified equity mutual funds, with a history of highly volatile price swings - will almost certainly outperform the market averages. Random walk theorists hasten to attribute these above average returns to the additional risk inherent in volatile stocks.

They claim that on a "risk adjusted basis," such portfolios will provide only average returns. Their concept is easily proven (to their own satisfaction, at least) by defining risk as volatility - hence they contend that higher returns accruing to portfolios of volatile stocks - or volatile equity mutual funds - are directly attributable to higher risk and do not represent superior stock selection.

Investors interested in making money rather than debating semantics might well argue that the only risk they fear is the risk of loss, and that kind of risk is low in a rising market. On the other hand, in a falling market almost every diversified portfolio or fund will lose money and an investor who expects a decline should be out of stocks altogether, not merely switching to less volatile stocks that will just lose money for him more slowly.

Thus, to the extent that investments are confined to periods of generally rising prices, namely to bullish phases, highly volatile stocks and equity funds are superior investments and can provide above average returns on a far more consistent basis than most other stock selection techniques.

A Beta tells not just how volatile a stock has been, but how volatile it has been: relative to the market. An extremely useful characteristic of Beta statistics of stocks is that they are so stable through time that it is relatively unimportant whether they are calculated from daily, weekly, or monthly data, or whether the historical base used in the calculation is one, two, or even five years in length.

A Beta of 1.00 means that, on average, a stock has traditionally matched the market's swings, moving just as rapidly as the indices on the upside and downside. A Beta greater than 1.00 reflects above average volatility, and a Beta less than 1.00 indicates below average volatility.

A Beta that is actually less than zero - a negative Beta - is typical of assets that move contrary to the general market, going down in bull markets and rising in bear markets. (Gold mining stocks often have negative Betas.)

Betas have been so widely used in recent years that they have become available at low cost to most investors. They have been widely studied and numerous historical analyses have proven that portfolios of stocks with high Betas will continue to exhibit the characteristic of high volatility in the future.

It is worth noting, however, that Betas do have a tendency to drift back towards 1.00. Volatile portfolios selected on the basis of Beta alone will therefore never be quite as volatile as expected, although the Beta volatility estimate will still be very good.

In a declining market, when all stocks should lose the same number of points from the square root of their beginning prices, we would expect the lower priced stocks to decline more rapidly and the higher priced issues to decline at a somewhat lesser rate.

However, like the Beta statistic, as the portfolio becomes more broadly diversified Square Root Volatility becomes a better measure of expected percentage change. For very large portfolios it is extremely accurate. Indeed, the author's research reveals that Square Root Volatility is usually superior to Beta as an estimator of future expected return, even though Betas are much better known and more widely used.

Used independently or jointly, the Beta and Square Root Volatility measures are valuable and highly functional stock selection tools. Most investors would improve their overall performance if they refined their market timing techniques and simply resorted to holding highly volatile securities during bull markets.

(Excerpt from The Stock Market Logic. Published by Vision Books.)