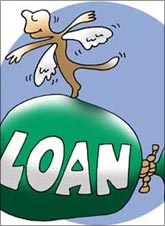 Several banks and housing finance companies have come under the scanner of the competition watchdog for imposing penalty on pre-payment of loans.

The Competition Commission of India, according to a CCI official, is scrutinising a complaint concerning pre-payment penalty from a customer against major home loan players like HDFC, LIC Housing Finance, and Deutsche Postbank.

"The customer has said that he should have the choice of repaying the loan before the scheduled period as and when interest rates are low," the official said.

The complaint has been filed under Section 3 of the CCI Act that deals with abuse of dominant position by companies.

Although the Commission has yet to take a view on the matter, the official said, if the lenders were found guilty of abusing their dominant position, the practice could be banned across the industry.

The CCI, he added, could also penalise the lenders for adopting such practices to discourage customers from pre-paying home loans.

Market leader HDFC, for example, currently levies prepayment charges ranging between zero to 2 per cent of the amount prepaid by a borrower.

During the pendency of an enquiry, the Commission can also provide interim relief by restraining the parties from carrying on the act which constitutes abuse of dominance, the official said.

The pre-payment penalties are imposed to discourage customers from retiring their debts before the scheduled date.

Some lenders charge only if the customer seeks refinancing the loan by taking money at a lower rate from some other entity.

'Competition Commission must look at PSUs'