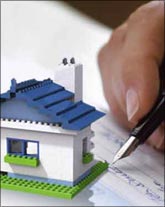 Sameer Tiwari, a Pune-based mechanical engineer, thought he had made a "prudent decision" by opting for a fixed rate, home loan five years ago from a reputed national bank.

Three years after the date of disbursement, Sameer received a letter, which said it was time for renewal of his loan and that the interest on his fixed home loan had been increased by 0.5 per cent.

On checking with the bank, he learned that there was a clause in the agreement that said the fixed rate was only for a period of three years and not for the entire tenure!

This letter brought endless, sleepless nights to Sameer and his family now, they had to recalculate and replan all their income sources and planned expenses because the "fixed EMIs (Equated Monthly Instalments)" will increase!

What is a loan agreement?

A loan agreement is a 'contract' entered into between the borrower and the lender (banks and financial institutions) that regulates the terms of a loan. The loan agreement comes into picture immediately after the bank appraises your credit and the property that you have identified.

The agreement and the fine prints

In the euphoria to acquire that dream house, various clauses in the loan agreement are often overlooked. However, these clauses have a significant bearing on areas ranging from interest rates to repayment schedules.

Reading home loan agreements is generally viewed as a sheer formality and one always tends to ignore points that the agreement mentions. Moreover, the legal language used in the document often seems more alien than human!

In any case, not reading a loan agreement thoroughly can land you in a soup. Here are some clauses, which should be searched for inside a loan agreement and be clarified with your HFC (Housing Finance Company):

Reset Clause on Fixed Rates: Banks have introduced the reset clause in their fixed rate, home loan agreements so that they can increase interest rates in case the market rates increase in future. This effectively makes fixed rate loans equivalent to floating rate ones.

This gives the banks an escape from interest rate surges but is a disadvantage for the borrower who is mostly unaware about such content in their agreement. Typically, the period for such reset clause varies from two to five years depending on the bank or housing finance company you borrow from. So read this clause in your loan agreement carefully.

For example, a cut in banks' prime lending rate (PLR) is not automatically translating into reduction of all PLR-linked loan rates. The reason being cited is that the bank's margins are under severe stress due to lending rate cuts.

They feel interest rates on some existing sub-PLR loans do not even cover their cost of funds and any further fall in those sub-PLR loans will worsen the matter. Therefore, some public sector banks have revised the existing loan contracts in case of select sub-PLR borrowers, by using the 'force majeure' clause, meaning a 'situation beyond control'.

Defining a Fault: A 'fault' for a layman often means a non-payment of an EMI during the loan tenure. However, your bank or HFC may have a different meaning for this term. The home loan agreement of few banks defines fault as a case when the borrower expires, the borrower is divorced (in case of more than a single borrower), or the borrower is/are involved in any civil litigation or criminal offence. Therefore, you must be clear what your lender means by the term 'fault'.

Security cover at times of falling property rates: This clause states that a bank is eligible to demand additional security when property prices fall. Even if you are loyal on your EMI payments, this clause demands a security cover in addition to your loan amount and if a borrower fails to provide such a security then he/ she may be declared a defaulter by the lender.

So whenever the BPLR is raised, then the interest to be paid on the floating rate home loan goes up. The vice versa also holds true. However, banks and HFCs do not show the same alacrity to reduce the interest rates, which they might have shown when increasing it.

When interest rates come down, banks and HFCs offer lower rates to new customers but existing customer continue paying the higher interest rates. Check with the bank or HFC regarding the details about such clauses.

These clauses are overlooked by most home loan borrowers and some of them eventually end up paying interest rates, fees, or hidden charges completely out of the blue. It is imperative that you have a thorough understanding of such clauses with your bank or HFC.