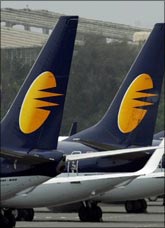 Domestic private air-carriers, Jet Airways and Kingfisher Airlines, on Friday raised their fuel surcharges by up to Rs 200 on domestic flights.

The hike comes into force with immediate effect, both said.

A Jet Airways spokesperson said, "We have increased the fuel surcharge by up to Rs 200 on all our domestic flights across Jet Airways, JetLite and Jet Konnect with immediate effect."