News
Business
Movies
Sports
Cricket
Get Ahead
Money Tips
Shopping
Sign in  |  Create a Rediffmail account
Rediff.com  » Business » Topsy-turvy markets: Do I invest or do I exit?

Topsy-turvy markets: Do I invest or do I exit? 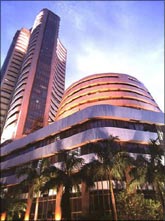 Markets dancing up and down: do I invest now or do I exit? This question is in the minds of almost all investors small or big; short-term or long-term. This is a problem because nowadays the markets are fluctuating so much that a 1 per cent to 2 per cent change per day has become quite common.

If one thought the market was weak two weeks ago and going down, this week the markets are looking up. So where does a salaried individual put his/her bet on? This article is to give some ideas particularly for the small investors.

The stock market fluctuates, that too when the overall economy is not that stable, it fluctuates a lot. This is true not only for India but across the world.

Again this is true not only in our times, but in all known history. To fluctuate is one of the basic characteristics of the stock market.

However, research -- or for that matter any five-year chart of the indices (Sensex or Nifty) -- shows that there is always a significant gain. The same is the case even for the 5 years ending December 2008, when the market has fell almost 50 per cent during the year.

What are the implications of fluctuation?

There are a number of negative aspects/scenarios to the short-term fluctuations.

1. Investments are still in negative even after the markets have gained.

If an investor had invested his/her funds at the peak of the market and stayed there, the funds would not have still recovered from the losses that they suffered in 2008. Will the investment ever recover? Should I exit, taking the loss?

2. The planned financial goal is here. But the market is still low.

The planned financial goal could have been the daughter's marriage, retirement, a housing down payment. But if one had the misfortune of a fall in the market happening right when the withdrawal was planned, it is definitely a long postponement of the plan (if possible) or financial trouble (if it could not be postponed). A requirement like a daughter's marriage cannot be postponed for want of money.

A loving relative's gift or an unexpected bonus or an arrear due for 2 years may suddenly land in an investor's hands. One can be sure that the same will not happen often.  So when does one invest this money in the market?

A better perspective to investments in the stock market is that the loss or gain is only on paper till the shares are sold. So the investment that has a lower value today as in scenario 1 has not lost its true value, unless one sells it. All that it needs is time to give a better value.

This perspective however does not solve the problem, when an investment is time bound as in scenario 2 or 3.

The question is thus not whether there will be returns or not but how does one time the market to get better returns?

Timing the market: Is it possible?

Is this the solution? Again the answer is 'NO'. Because we could find the right time to invest in the market only retrospectively. No one could guess to what extent the market would react to certain economical news.

So too no one could guess accurately in advance at what level and when a market would turn down or up.

So timing the market is not really possible. However, any five years' graph will show a steady gain as discussed earlier. So can we use time in the market to our advantage?

Time in the Market The Solution

By increasing the time in the market by being invested for a longer period and by investing in a higher frequency, we can overcome the problems related to the fluctuations in the market.

This is definitely a solution that can be used to tackle the problems faced by the small investors.

By increasing the time in the market (investment period), fluctuations are over come. This requires planning earlier and investing at least for a period of five years.

Even the one time lump sum of money, can be invested over a period of, say, five months in smaller chunks. This will take care of the market ups and downs during the investment period.

Those who have invested for their retirement and their daughter's (or son's) marriage can practice the same but in reverse order. Rather than wait till the date of retirement for the withdrawal from the market, they could withdraw over a period of 6 months before the marriage.

This will not only help them in the run up to the event but also prevent losses from any sudden fall in the market.

Timing the market for its ups and downs for making investments is not possible as accurate prediction is in the realm of speculation.

BankBazaar.com is an online marketplace where you can instantly get loan rate quotes, compare and apply online for your personal loan, home loan and credit card needs from India's leading banks and NBFCs.
Copyright 2021 www.BankBazaar.com. All rights reserved.
Related News: India
SHARE THIS STORY
Print this article