G-20 at centre of US' cooperative effort: Geithner 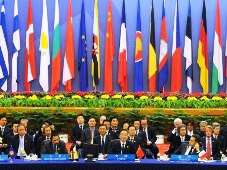 Noting that G-20 is the premier forum for international economic co-operation, US Treasury secretary Timothy Geithner has told lawmakers that the Obama administration is placing the forum at the centre of its global economic cooperative effort.

G-20 is a group of the 20 most powerful economies of the world, including India.

"After decades in which cooperation was focused on a small number of the major industrial countries, we've made the G-20 the premier forum for international economic cooperation," Geithner said in his testimony on Tuesday before the Senate Foreign Relations Committee, which had convened a hearing on global economy.

"We're working to strengthen the international financial institutions so they can play a more effective role in promoting our interests in global growth and development.

"As part of this, we are examining a set of reforms to improve internal governance in the institutions, to provide more focus on core priorities of development and to strengthen the financial structure of the banks," Geithner said, adding that reform of the International Monetary Fund and the World Bank is at the top of their agenda.

"We're supporting a set of reforms to the governance structure of the institutions to increase the rights and responsibilities of our major trading partners and the most populous, rapidly growing economies in the world," he said.

"This is why we created the Financial Stability Board, as a complement to the existing Bretton Woods institutions, and why we expanded this forum for cooperation on financial standards to include all the G-20 countries," Geithner said.

These reforms to the architecture are critical to advancing US interests, Geithner said adding they have very broad support internationally.

Geithner said during their discussions this week, in Singapore and China, US President Barack Obama emphasised that the US and China must be at the centre of efforts to put the global economy on a more sustainable and balanced growth path.

"China has to move to take steps to move away from excessive reliance on exports to domestic consumption-led growth. And as you saw in the G-20 and in APEC, there is very broad support around the world for this view," he noted.

Observing that China is very important to the United States economically, he said: "We want to see more open markets in China, a more level playing field for US companies that compete in China and compete with China around the world.

It's very important we see financial reforms, broader reforms to their exchange rate system over time that would help reinforce this process towards a more balanced global recovery.

"I think what's really remarkable is, again, if you listen to what countries like China, like India, like Brazil are saying about their basic reform agenda, how close it is in sort of basic values and judgment to many of the things we're trying to do in the United States, even though our sort of situations are very different, political systems are very different," he said in response to a question.