Futures & Options: Are they investments? 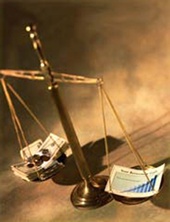 Futures and options are basically derivatives traded in exchanges. Derivatives by definition are those financial products whose values depend on the value of some underlying assets. For example an option on wheat will depend on the actual price of wheat in the market. A future on the US dollar will require a margin that depends on the current exchange rate of the Indian Rupee to the US Dollar. The share option & future also depends on the actual price of the share in the market.

Derivatives are contracts that were conceived basically to over come future problems. They were traditionally used to hedge (protect) the capital invested and /or the profit expected. The origin of derivatives can be traced back to the forward agreements between traders and farmers for agricultural commodities. The agreements between them basically fixed the price of the commodity say cotton (India had a robust cotton forwards market prior to Independence) irrespective of the volume grown. The advantage to the farmer was that the price for his produce was known in advance and he gets an advance payment too to support his sowing and crop growing. For the trader the advantage is that the price is fixed and he gets a steady supply of the crop. Derivatives thus prove to be beneficial for the farmer and the trader.

The derivatives markets today are dominated by the forwards market for foreign exchange deals between companies and their bankers and by the futures & options market for the share market and the commodity market.

The volume of trade in India in the derivatives market for stocks is very high, in the range of Rs 68,000 crores (Rs 680 billion) every day. Compare this with only about Rs18,000 crores (Rs 180 billion) in the actual cash segment (where shares are bought and sold) of the stock market.

The volumes do not justify any hedging being done by actual share holders. The market is being dominated by speculators who look at daily positions trading. Thus the purpose for which derivatives were created is not being made use of in the market traded derivatives.

No, they are not. Futures are contracts to buy or sell an underlying (share or commodity), which expire at a particular time. Options do not obligate the buyer of the option to fullfil the contract, if it is unfavourable for him/her. Options require a premium to be paid for entering into the contract. Futures only require a margin to be maintained. After the expiry of the time, they have no value.

Since the value of the contract expires automatically, derivatives are not assets. Hence they are not investments too.

Derivatives have very high leverage. Leverage similar to the normal lever used in everyday life, where in a small applied force is multiplied many times. Examples being the car screw jack, and scissors. Financial leverage is used to make a small amount of money work the equivalent of a large amount of money.

This is made possible using derivatives. The price or margin required to enter into a contract is low. But the contract value itself is large. Even a small profit margin in the contract, will give big returns to the person who entered into the contract.  For example an option contract on L&T for 200 shares at Rs1560 costs Rs124 only. That means with only Rs 124 in ones pocket a trader can deal with money worth Rs 1560 x 200 = Rs 3,12,000/-. For a Rs 2 margin per share (if it materializes), the trader will make (Rs 400 - Rs 124) Rs 276 as profit - this amount to 220 per cent  profits.

However the down side for the leverage is that it can also act against the trader. In case of a even smaller loss of say Rs1 per share, the loss for the trader is (Rs 200 + Rs 124) Rs 324/-. Much larger than the money that he/she brought to the table.

Unlike direct investment in shares, in the futures and options business the losses and gains are for real and have to be borne by the trader. Also in India the maximum time for the contract to expire itself is only 3 months. This time is not enough for any serious hedging and is suitable only for speculation. The problem here for the trader is that one cannot sustain a series of losses, whereas the large financial institutions that are creating the derivatives can.

Futures and options are not investment tools. They are part of the broader tools called derivatives used for hedging of assets and to protect profits. In India, futures and options are predominantly used by speculators. The good and bad side of derivatives is that they are highly leveraged. But the risk is higher for the trader as he/she does not have deep pockets to sustain a series of losses.

BankBazaar.com is an online marketplace where you can instantly get loan rate quotes, compare and apply online for your personal loan, home loan and credit card needs from India's leading banks and NBFCs.
Copyright 2021 www.BankBazaar.com. All rights reserved.
Related News: India, US, L&T
SHARE THIS STORY
Print this article

L&T: Everything's not in order