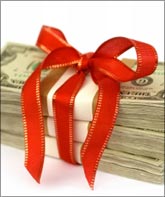 High value gifts were a safe haven to show one's love to others financially. Now the tax man has tightened (putting it mildly) the strings attached to gifts. In fact the rule has become so tight that it may be the end for all high value gifts in India.

Since 1998, there is no Gift Tax per say in India. The gift is added to the income of the receiver and is taxed accordingly.

Earlier (prior to October 1, 2009), gifts in kind (a car or a house) were not considered at the cash value.

Also all gifts received at the time of marriage were exempt from tax. The gifts could have been from anyone and of any type.

This made very high value gifts the norm at the marriages of very rich people. The taxman was hoodwinked by making marriages occasions for large scale conversion of illegal money (black money) into legal gifts.

The change in the rule related to gifts says that the receiver has to pay tax for receiving any gift valued at Rs 50,000 and more.

The 'any gift' clause means that not only cash but all gifts of any value. So if someone receives a gift of a house worth Rs 30 lakh (Rs 3 million), then he/she is automatically in the highest income bracket and has to pay 30% + surcharge on value of the house as tax (close to Rs 10 lakh (Rs 1 million) in this case).

Which donors' gifts are exempt?

The gifts received by a son-in-law from his parent-in-law will be taxed.

A Non-Resident Indian can gift to his/her parents in India from their NRE (Non-Resident External) account without their parents suffering any tax.

The gifts received in the names of one's minor children will be clubbed with the parents' income for taxation purpose.

Also the taxman is very alert in saying that, in case of both parents having income, clubbing will be done with that parent who is earning more.

So one cannot hide under the cover of their minor child(ren) receiving the gifts.

Other deals that comes under the hammer

Not only gifts, but any real estate deal done for values lower than the state governments fixed rates, will also be taxed.

Here the tax will be charged on the difference between the state government's rate and purchase price. The tax needs to be paid by the buyer of the property.

The tightening of the rules related to gift tax will curb money laundering to a great extent. However it does protect genuine gifts from relatives and loved ones. Several guises used earlier to cover up transactions as gifts are now taxable.

BankBazaar.com is an online marketplace where you can instantly get loan rate quotes, compare and apply online for your personal loan, home loan and credit card needs from India's leading banks and NBFCs.
Copyright 2021 www.BankBazaar.com. All rights reserved.
Related News: India, NRE
SHARE THIS STORY
Print this article