Why interest rates may soon rise 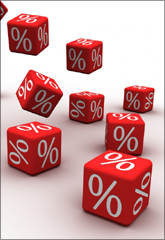 The deficit for the current fiscal year projected in Budget 2009 is significantly higher than the 5.5 per cent projected in the interim Budget.

While the government has its own reasons to support growth, high deficit can affect the larger economy. Rise in interest rates being one implication.

Now, apart from high government borrowing, a poor monsoon has started building inflationary expectations into the market. As a result, yields are hardening in the bond market. Yields on 10-year government paper have moved up by close to 100 basis points (bps) since July, and almost 200 bps since the beginning of 2009 (bond prices and yields are inversely related).

Where are the rates headed? Bond markets reflect market expectations -- direction of interest rates in terms of borrowing and lending. Say, a bank is getting 6 per cent by investing in government bonds, the safest option.

While lending to individuals and businesses, other things remaining equal, depending on its risk perception of the borrower, it will lend at 6+x per cent, where x is the risk premium.

However, if the bank starts getting 7.5 per cent on government bonds, it will lend at 7.5+x. So, if x remains the same, the lending rate will go up by 150 bps.

Yields are expected to remain firm in the coming months. Says, Amol Agrawal, economist, IDBI Gilts, "We expect the yield on 10-year government paper to be at 7.75 per cent by the end of FY10."

The yield could rise due to a variety of reasons. First, although the government has said it intends to cut deficit in the next fiscal, the markets are wary, as cutting government expenditure has always been difficult.

Second, expectation of high inflation will continue to push yields up. As of now, the Wholesale Price Index (WPI) is showing low inflation due to the high base of last year.

If we see the index in isolation, it clearly indicates the uptrend in prices (see Contradictory). The WPI inflation will move up quickly as the base will get lower, reflecting the fall in commodity prices in the last quarter of 2008.

Says Shubhada Rao, chief economist, Yes Bank, "We expect inflation to be at 6.5-7 per cent at the end of this financial year." As a result, we may actually see the Reserve Bank of India coming into action in its April policy review, though many other factors such as the growth outlook will also play a role.

Third, the demand for credit is expected to improve in the second half of FY10. But, the impact of this may be limited since there is sufficient liquidity in the market.

But, Barua adds, lending rates could go up by 50-75 bps by the end of this fiscal.

Although, interest rates will depend on a variety of factors, it is safe to assume that they have bottomed out, or are close to the bottom. Plan your borrowings accordingly.

On the investment side, rising rates may not impact the overall stockmarkets, as other factors like growth will continue to dominate the proceedings. However, banks' treasury income may be hit due to falling bond prices. Your debt funds will see a similar impact.

Cate Blanchett to be Lady Mountbatten?