Borrowing to invest? Things to remember 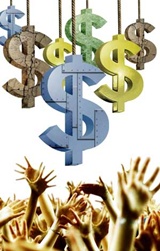 I know a few people in the financial planning business suggesting to their clients to consider leverage or borrowing and using it to invest. They christen borrowing as a good way to build wealth. Unfortunately this might not be true at all.

Nevertheless most of the clients buy this theory of their financial consultants and planners as they are the ones who previously had sold loan products to them. And the financial planners on their part show you all sorts of graphs, charts and inflated calculations to prop up their suggestions. However there are a few things that you should know before you decide to borrow to invest.

Consider this: Things have been different since 1999 when mortgage rates began to fall, and college loans were affordable without the parents having to mortgage their assets. Literally, loans were given for almost everything causing the personal savings rate to tumble, and the household debt payments as a percentage of disposable income to skyrocket. Big houses were furnished in a big way. And the EMIs were getting fatter and fatter.

There were instances of leveraged positions on the buy and sell side by the retail traders. Brokers were making merry and bagging more money far more than the combined wealth created by all investors. In the US no one was uptight on the leverage-based on the mounting housing price curve. There were loans for NINJAs, the No Income No Job Applicants but things were different in India with the Indian banks not willing to give even the minimum loans to people with minimum incomes. And then the bubble burst!

Times have changed today. The global economic slowdown has made the world witness a correction of sorts on all facets of its system. This has led to more stringent rules in place now and a more responsible outlook and a fresh perception of things on hand.

Firstly, you should decide if you need to borrow at all in the first place. That said it is equally important to realize and understand that there has always been good reasons to borrow even during these days like your child's education, or a mortgage for buying a new house or a car loan! However, making more percentage of down payments could make your borrowings smaller and easier to manage. Being conservative is the key for today's world. Do not borrow unless you desperately need it to be done.

When leveraging, keep a close watch on the total cost of borrowing!

Everything was just about fine when Lehman Brothers filed bankruptcy and Bear Sterns was denied the bailout package by the Congress. However when more and more banks and financial institutions began to tumble the bubble burst pulling the global economy into a downward spiral. At a micro level too it is highly important for you to keep a close watch on your total cost of borrowing when leveraging. Things could take a nasty turn if everybody tries to give up the debt.

It might be your builder facing a similar problem with his borrowings and investments and hence might push you for early installments. A similar fiasco at your workplace could mean layoffs by your employer to offset leverage. You might also feel helpless with your equity or debt portfolios following the turbulent scenes in the global markets when many of the companies you owned begin to show their true leverage. Your planned monthly savings that you had comfortably made till now may not look like a great idea anymore. Due to all these and several other factors new leverages might not be happening to you in the form of cards, cars or foreign trips. So what do you do now?

Points to remember when borrowing to invest

There are some points that you should remember when leveraging to invest. Firstly, never give up being very conservative about debt. Take it only if you need it, not otherwise. Secondly, manage your debts wisely. For example, you could get an affordable mortgage to make at least 35 per cent towards down payments. Thirdly, never say yes to furnishing or home improvement loans as they make no sense. Instead you could spend on consumer durables from your own income.

BankBazaar.com is an online marketplace where you can instantly get loan rate quotes, compare and apply online for your personal loan, home loan and credit card needs from India's leading banks and NBFCs.
Copyright 2021 www.BankBazaar.com. All rights reserved.
Related News: Bear Sterns, Lehman Brothers, Congress, India, US
SHARE THIS STORY
Print this article