News
Business
Movies
Sports
Cricket
Get Ahead
Money Tips
Shopping
Sign in  |  Create a Rediffmail account
Rediff.com  » Business » How you can cut your tax liability

How you can cut your tax liability 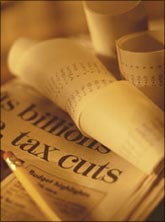 Certain investment options have been provided in the Income Tax Act, 1961, which, when exercised, can help in reducing tax liability. Section 54EC is one such option.

The benefit under this section can be availed of only if there is an income from a capital asset, being long-term in nature.

Long-term capital gains are the profit that a person makes when he sells any capital asset (for example, any immovable property, jewellery or shares) which he has held for a period exceeding three years. An exception is his holding of shares in which the holding period has been fixed at one year.

Any person (including NRI out of NRO account on a non-repatriable basis) and Hindu undivided family (HUF), through its Karta, can make investments (not exceeding Rs 50 lakh -- Rs 5 million -- in a given financial year) in the two bonds notified by the Government of India.

In case only part investment is made, the amount of deduction gets reduced in proportion to the investment.

The two corporations which have been notified by the Government of India as being eligible for issue of these bonds are (a) National Highway Authority of India (NHAI) and (b) Rural Electrification Corporation (REC).

These bonds carry a lower rate of interest as compared to other investment options, such as Public Provident Fund, bank fixed deposits and National Savings Certificates, among others.

The main reason for this lower rate of interest is that the investor gets the benefit of reducing his income tax liability upon investing in these bonds, if he has long-term capital gains. These bonds are issued for a fixed maturity period of three years. These bonds have been rated as 'AAA/Stable' by Credit Rating and Information Services of India (Crisil).

The investment has to be made within six months from the date of the transfer in order to be eligible for claiming the benefit of deduction under section 54EC. The face value of these bonds is Rs 10,000, and the full amount has to be paid upfront along with the application.

The maximum amount that a person can invest in these bonds (NHAI and REC combined) in any financial year is Rs 50 lakh.

If a person has long-term capital gains which have accrued to him after 1 October of any year, and the amount of capital gains exceed Rs 50 lakh, he can split his investment by investing Rs 50 lakh up to March 31 of the following year and the balance on 1 April of that year.

The balance amount in this case, however, should not exceed Rs 50 lakh. By doing this, he can have the benefit of investment of up to Rs 1 crore (Rs 10 million). Joint applications shall also be included for the purposes of this limit.

The deemed date of allotment is the last date of the month in which the application is made and the amount is realised by the issuer.

However, transmission of the bonds to legal heirs in case of death of the bondholder is allowed under the rules.