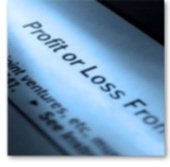 You don't need to be a CA or a CPA to understand one of the essential and important financial statements found in a company's annual report and in other such filings: the income statement.

What is an income statement?

Some of the key things that you will find in the income statement are the total revenues, net income or earnings per share or EPS. For a shareholder the EPS is important as this will be the share of the company's net earnings that he will take home. However, most companies do not distribute all of their earnings but instead reinvest them in the business.

The income statement is more like a direct answer to the health and financial status of the company. Every investor would like to invest in companies that incur low expenses relative to revenues and consequently post higher profits relative to revenues. Every shareholder is thus benefitted from investing in companies with healthy financial status.

The revenues section is perhaps the simplest part of the company's income statement. Revenues are commonly known as sales and are the total money given as a single figure. It is the amount the company has made through various avenues during a particular period. However, some companies, if operating from many countries or across many segments, might give many figures which will be primarily the breakdown of revenues to provide more information.

A company might incur many types of expenses however the most common of them all are the cost of sales and selling, general and administrative expenses or SG&A.

Let us see what cost of sales mean. Also called cost of goods sold, cost of sales is the most direct expense involved in generating revenue. For instance, if a company makes a shirt for Rs100 and sells it for Rs 150 then the cost of sales for the company in making that shirt is Rs 100.

Operating expenses are the costs involved in selling, general and administrative expenses like marketing, salaries and technology among others as incurred by the company.

Profit is arrived at by deducting the total expenses from the total revenues. This is the simplest form of profit calculation. However, there are many other profit subcategories used in the business world such as gross profit, operating profit and net income.

The company's gross profit is calculated as the revenue less the cost of sales. And this money that is got is the amount that is spent on operating expenses after the sales. This should typically mean profits to shareholders.

In our above example of a shirt, the gross profit from the sale of shirt is Rs 50 (Rs150 is the sales price minus Rs 100 towards cost of sales).

The operating profit is the revenues made after deducting the cost of sales and sales, general and administrative expenses that include marketing expenses, salaries and other expenses that are not directly linked to the company's actual operations.

The net income of a company is the revenue minus all expenses including everything related to the company's operations. This is otherwise called the profit or earnings.

BankBazaar.com is an online marketplace where you can instantly get loan rate quotes, compare and apply online for your personal loan, home loan and credit card needs from India's leading banks and NBFCs.
Copyright 2021 www.BankBazaar.com. All rights reserved.
Related News: EPS, CPA, SG&A
SHARE THIS STORY
Print this article