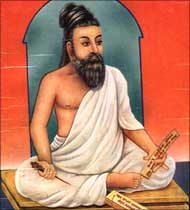 The Thirukkural is an ancient non-religious literature that guides people on better living. Though written over 2,000 years ago by Thiruvalluvar in Tamil, the way of life advised by Thirukkural is still relevant today.

This article is an attempt to bring the wealth of knowledge embedded in Thirukkural about finance; accessible to everyone. Thirukkural is composed of 1,330 kurals in 133 sections of ten each.

A Kural is a couplet and each Kural is composed of 7 words spread across 2 lines [4 + 3 words]. The work on wisdom is divided into three major chapters - those that speak about virtue, wealth and love.

From a personal finance perspective, there are a lot of lessons that one could learn from the chapters on virtue and on wealth.

It says: 'Even when apparently giving gains, ways which are not truthful are to be abandoned.'

The sub-prime crisis can be quoted as an example of one such activity. The lenders who got carried away by the real estate boom tried to make the most of the situation and ended up going overboard due to their greed. They wound up lending money to lower value assets.

Those borrowing were also in the same mental frame to make the most of some one who is ready to lend to them. They disobedyed every fundamental law that dictates basic economics and as the act was devoid of any logic and the ways of the people involved was not fundamentally truthful, it lead to a global crisis costing trillions of dollars.

It should be highlighted at this point that, Indian banks did not suffer because of the wisdom of the Reserve Bank of India and the Securities and Exchange Board of India in not allowing them to take more risk than warranted by their core businesses.

The fall of the Western financial institutions could be compared to the get-rich-quick-schemes doing the rounds regularly now and then making lives miserable for all the greedy investors. Wealth created by the righteous means will not only serve those who earn the wealth but also their future generations.

It means: 'Wealth (children, financial wealth, friends, charity and fame) earned by a person using fair means will protect not only the person but also his future generations.'

Thinking retrospectively, we can definitely remember those who earned their wealth by their own hard work and dedication. Only a few of the infamous are also remembered as their deeds are truly devastating.

The Thirukkural also talks about the role of the family's head in managing money.

It means: 'Producing, saving, protecting, regulating and equitably sharing is the way to powerful governance.'

The context can also be applied to any businessman or statesman too. The power of this wisdom can be understood by those who are in financial trouble. Most people fail miserably in managing their finances due to a lack of balance in these five factors mentioned above in the Kural.

Many of us, in today's generation and in our parent's generation have dedicated ourselves to earning more money only.  Our parents did save most of their earning. This is missing with most of us today. As a country we hardly take efforts to protect our wealth - to monitor it and to make wealth work for us.

When we had the joint family system, there was some way to protect and regulate the accumulated wealth. In today's India, there is no such protective mechanism. The wealth only gets split into smaller and smaller pieces till it becomes unviable to have it. Imagine the plight of the marginal farmers in India.  At one point in time their ancestors had much larger pieces of agricultural land.

Equitable sharing during and after one's life time is again a thing lost in our society today. Imagine even the richest families in India fighting among themselves for their parent's wealth (Ambanis and the Birlas).

Another aspect of equitable sharing is at a macro/social level. The per capita GDP of India is a mere Rs 3,000 per year. Assuming 4 persons per family this comes to Rs12, 000 per family per year. Can any of us imagine living on only Rs1,000 per month for a family of four? I guess not.

And the Rs 1,000 is the average - which means there are a lot of people living with less than Rs 1,000 per month per family. In current lifestyles, people spend much more than that on a single day's party with friends - every month. This in-equality in wealth can be attributed to many of the social problems facing India today.

BankBazaar.com is an online marketplace where you can instantly get loan rate quotes, compare and apply online for your personal loan, home loan and credit card needs from India's leading banks and NBFCs.
Copyright 2021 www.BankBazaar.com. All rights reserved.
Related News: Securities and Exchange Board of India, GDP, Kural, Equitable, Birlas
SHARE THIS STORY
Print this article

Satyam an aberration in system: Govt