News
Business
Movies
Sports
Cricket
Get Ahead
Money Tips
Shopping
Sign in  |  Create a Rediffmail account
Rediff.com  » Business » How the market tells you when to stop

How the market tells you when to stop

If you are having a string of winners, don't stop trading arbitrarily. If you stop trading thinking that the odds are that the string will end soon, you are trying to impose your will on the market.

I went over to the Chicago Board of Trade in the spring of 1976. Among the group that entered the trading pit in futures that year was a guy by the name of Chuck Cohen. Chuck was my age, so we immediately hit it off. For the first year, Chuck struggled to learn the ropes of scalping in the pit. He traded in small lots and as the bond futures markets grew in volume, he slowly found himself being edged out of the trades. 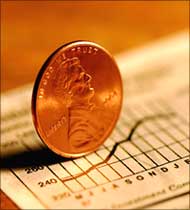 He was wired all the time and would respond to each trade like a jack rabbit darting out of the closing teeth of an animal trap. At the close of each trading day, his jacket would be wet with sweat. Yet, he usually wound up breaking even during the course of the day. Every so often he would make ten or twenty ticks a day for his profits - usually the result of several hundred trades. Chuck earned his money.

We all hoped Chuck would succeed as a scalper, despite the fact that other traders, including his friends and colleagues, were profiting from his mistakes. In fact, the mentality in the trading pit is similar to that of the water buffalo in the South African plains who are under attack by lions and tigers.

When they know that they are about to be attacked, they gather together in a circle and face outward with their heads lowered and their horns directed at the attackers. The buffalo know that they must form in this manner for the safety and protection of them­selves and the others. In a group they can thwart all ene­mies; alone they fall prey to the superior claws and teeth of the lions and tigers.

In a similar manner, all traders know that their own financial viability depends on the soundness of other traders. They know that when they trade with the other person in the pit, that person must be able to honor that trade. They also know that if they lose money, they will lose it to the other traders or brokers.

Yet, they all must stand together in the pit against the outsiders. The individual trader doesn't want to lose, yet he or she wishes that the other traders would also win. They look up to those who succeed against the terrible odds for success.

A strange environment to work under, indeed.

Later in the year, I talked to Chuck when he was on a losing streak. He continued to trade, despite the fact that he was losing. He didn't want to be beat by the markets, yet he wound up losing even more.

Chuck did exactly the opposite of what a successful trader does. When he was winning, he whimsically stopped trading. When he lost money, he continued to trade instead of taking a break.

If you are trading and you are a winner there is no reason why the trend must stop. The trend is for you to follow; most people think that if they stopped trading with the trend, the trend will stop. Trade until you encounter losers, then stop. When you experience a string of losses, stop and come back again. Don't try to hammer the markets.

In the same manner, you must know when to stop trading and take a rest, you must also change your trad­ing style at different stages of your life. When you are young and your reflexes are razor sharp, you can be a good scalper. You can turn around at the drop of a hat and hit the bids and take out the offers before anybody else.

When you approach middle age, your joints start to hurt if you stand in the pits longer than half a day. You flex your knees often and yawn when the markets become quiet. At this stage, you progress to longer term trading. When you are old, you position trade. This diminishes the capital risk that you take on and hence your level of stress.

These observations on the life cycle of a trader are based on the "rule of three tens," which I learned from David Goldberg, the founding partner at Goldberg Brothers. This rule points up how long it takes to become successful in the futures trading business. It divides a trader's career into three ten-year blocks of time.

You spend the first ten years on the floor scalping and making a living. You make money one day and lose it the next. Over the course of ten years you learn to make more than you lose, you learn the ins and outs of the business, and you gain the ability to scalp for a living. During the second ten years you really start to make money.

This rule presents an expected time frame to learn the business, to trade the markets, and to retire. If you try to modify the market's sequential ordering, you will encounter nothing but frustrations. You must do what the markets want to do.

In the case of the rule of three tens, you know what one can and must do at different stages in life. But when the markets are trending, how do you know if the markets are set to reverse or will continue onwards?

The simplest rule is that if you are having a string of winners, don't stop trading haphazardly. Using the simplest definition of a trend reversal - when you have a string of losers - then you stop. If you stop trading because you have had a string of winners and think that the odds are that the string will end soon you are trying to impose your will on the market. Let the market tell you when to stop, and that is at the slightest hint of a trend reversal.

Would our leaders have done what Bill Clinton did?